Mumbai (Maharashtra) [India], February 21 (ANI): The makers of John Abraham, Jacqueline Fernandez, and Rakul Preet Singh-starrer action-thriller on Sunday announced the release date of their upcoming film 'Attack'. The movie will be released in theatres on August 13, 2021.
The 'Dostana' star took to Twitter and announced that the film will be released on Independence day weekend. 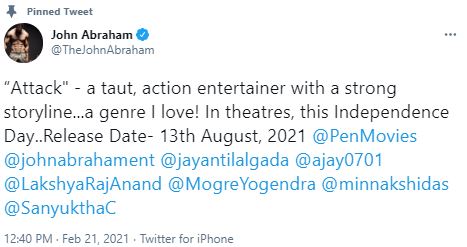 "'Attack' - a taut, action entertainer with a strong storyline...a genre I love! In theatres, this Independence Day..Release Date- 13th August, 2021," tweeted Abraham.
In May, last year, the 'Garam Masala' actor took to tweeted to inform about the acquisition of rights to the Hindi remake of Malayalam action thriller 'Ayyappanum Koshiyum.'
Abraham took to Twitter to share his excitement.
"Ayyappanum Koshiyum, a film that strikes a perfect balance between action, thrill, and a good story. At JA Entertainment we are keen to bring such appealing stories to our audience..we hope to make a truly engaging film with this remake in Hindi. Really Excited !!! " he tweeted.
The original film featured actors Prithviraj Sukumaran and Biju Menon. (ANI)