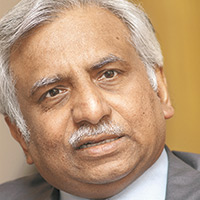 08 November, 2014
Print this article Font size -16+
Had national carrier Air India announced a Rs 2,465-crore loss over three months, no one would have batted an eyelid. But when India’s once-largest private airline, Jet Airways, says it totted up the loss in a single quarter, one cannot help but take notice.

So, what is the reason behind Jet’s massive loss in such a short period? An amount that, in fact, equals the airline’s accumulated losses since 2003-04.

Of the Rs 2,465 crore, Rs 700 crore can be explained by the revaluation of JetLite (by an independent valuer) which, since March, has shown a negative net worth. The budget carrier has been shown as a non-cash loss as part of a larger clean-up of the books. Besides, Rs 578 crore has been put down to a one-time maintenance expense. But, even accounting for these two, there is around Rs 1,200 crore in losses for the quarter. Of this, Jet, in a detailed response to BW | Businessworld, claimed that the combined operating loss for Jet and JetLite was Rs 764 crore for the quarter, excluding a one-time, one-off cost, which remains unexplained.

Although the airline’s losses are mounting, debt is lower than what it was some time ago (see Excess Baggage). It’s not an overriding worry as a lot of it is towards aircraft purchase and is, therefore, asset-backed. Plus, the Etihad investment offset some of the more expensive debt.
Yet aviation industry analysts believe that Jet’s problems cannot be easily resolved, especially since its “domestic business will largely remain unprofitable” since the cost per available seat kilometre (CASK) exceeds the revenue per available seat kilometre (RASK) on almost all routes.

An ex-Jet official and a former member of the top team explains why. “Fundamentally, Jet, like Kingfisher (Airlines), has had a high cost structure since infancy. In the airline business, you can change everything except the cost structure. But with the decline in business-class traffic and the rise of low-fare airlines, Jet is constantly selling below cost. And this results in huge operating losses.” He says that while some routes — typically the busy metro routes and some international routes — make money, many of the domestic routes don’t. Essentially, the domestic business model is “structurally unviable”.

Moreover, company insiders and pilots say that for the past two years, there has been no consistency in the network. “The expansion in network after the collapse of Kingfisher has been haphazard. Flights have been introduced for a few months and then when they make large losses, discontinued in a day. If there is some method to the madness, it’s not evident to us. This is not the way Jet functioned in the early days,” says a Jet captain, who has been with the carrier for almost 15 years. To illustrate his point, he cites a few examples. He says the Bangalore-Mumbai route, which used to be profitable, saw new flights getting added before the management realised that almost two flights on a daily basis were virtually empty; routes such as Bangalore-Hyderabad-Raipur and Bangalore-Bhubaneswar were introduced and then withdrawn suddenly.

Similarly, on international routes, flights to Johannesburg and Milan were started and then stopped after the airline found it could not compete with Emirates or South African Airways on these routes. “Even to us, it has been very confusing. Where we want to fly to and where we don’t, doesn’t seem very clear,” says the captain.

Jet says this constant tinkering is business as usual. Like other players in the Indian aviation sector, Jet too has been regularly evaluating its loss-making routes and pulling out of unprofitable ones. Domestic services were temporarily withdrawn from Rajahmundry, Vijayawada and Tirupati and international services on the Kolkata-Bangkok and Chennai-Colombo routes were also withdrawn.

If pilots are confused, passengers are no better. Endless tinkering with the model and offerings has ensured that no one knows what Jet represents anymore. When one buys a ticket one no longer knows what to expect — Will it be an ATR or a Boeing? Will it be JetLite or Jet Konnect? Will it be serving food or won’t it? An increasing number of Jet loyalists have shifted to IndiGo as they prefer its predictability. Moreover, with the commoditisation of air travel, frequency and reliability are what matter to passengers, rather than the quality and sheen of the service.
break-page-break
The management claims it is currently putting in place a plan for the airline to return to profitability in the next 18 months, something Jet’s former CEO Wolfgang Prock-Schauer spoke to BW about back in 2008-09. This turnaround has eluded the airline so far and has impacted both the airline’s ability to raise funds from the market and its market capitalisation.

Revolving Doors
According to Kapil Kaul, CEO, South Asia, Centre for Asia-Pacific Aviation, one reason for Jet’s losses is that its founder chairman Naresh Goyal and his team were so preoccupied with bringing in new investment — from Etihad Airways — in a bid to save the airline, that they lost the pulse of the market in the bargain. “Jet has been disconnected with its business in the past two years. In the first year, it spent time scouting for an investor and seeing the deal through. The next year was spent clearing regulatory hurdles and satisfying the endless bureaucratic requirements. In the meantime, business suffered. These results reflect this complete disconnect,” says Kaul.

Company insiders agree that there is no denying that a disproportionate amount of senior management time was spent in either Abu Dhabi or New Delhi trying to get the deal through.

The deal with Etihad has also resulted in a large number of senior-level exits. Though Jet argues that its attrition levels are below industry standards, the exits have been continuous. To be fair, a new investor or partner usually heralds some change, but in Jet’s case, it began losing talent well before the Etihad deal.

Things began to unravel faster in 2012 when, in June, the airline’s chief financial offer M. Shivkumar resigned to join Raymond. This was followed by the exit in May 2013 of Nikos Kardassis, the CEO who saw the Etihad deal through. In September, K.G. Vishwanath, Jet’s VP who started his career with the airline, left the carrier. A month later, chief commercial officer (CCO) Sudheer Raghavan — who had been with Singapore Airlines prior to his stint with Jet — also left. Meanwhile, Etihad brought in Gary Toomey as the CEO but he, too, abandoned ship in January. More recently, in April, Ravishankar Gopalakrishnan, CFO and acting CEO, left the airline.

Analysts and company officials are now questioning the ability and experience of Cramer Ball, Jet’s new CEO appointed by Etihad. He is responsible for turning around Air Seychelles — an airline with three-odd aircraft. “Can he handle an airline of Jet’s size and complexity in a country of India’s size and complexity?” is what people are asking.

Flight Plan
Yet even with people leaving, the airline needs to sharply reduce numbers from its current 14,000-odd employees. Not only is its employee-aircraft ratio too high, some of them are also expensive. In 2007-08, when the airline went international, it had no choice but to hire expensive staff, senior management and pilots from rivals and existing carriers like AirAsia and others. “Poaching is always an expensive proposition. So, Jet now has to both reduce fat and bring down salaries, which is never easy,” says a former company official.

There are two or three other problems confronting the airline today. The first is of differing cultures and the need to somehow blend the two. Jet has, over the years, evolved its own culture and Etihad operates in a very different manner, so this will be an issue. Second, even if cultures manage to blend, the objectives of both the partners are quite divergent. Jet Airways is looking to regain its dominant position in the Indian market and somehow return to profitability, while Etihad is looking for more traffic out of India in a bid to compete with Emirates and Qatar Airways. “As I see it, the objectives of the two partners differ significantly and that can cause further problems,” says a former Jet official.

And last, but not least, the entry of two new carriers — AirAsia India and Tata-SIA — is also likely to increase pressure. Competition is never easy, but in Jet’s case, coming at a time like this, it could prove to be the final nail in the coffin. Lower fares triggered by AirAsia India’s entry will reduce yields for all players, something Jet can ill-afford. Tata-SIA’s entry will, of course, be an even greater threat because it will mean increased competition in its handful of established and profitable international routes from a formidable rival. Goyal’s own ability to lobby and manage the external environment has taken a beating with the change of guard in New Delhi.

So, if Jet’s problems look big today, they will most likely be bigger tomorrow. Will Goyal manage to pull a rabbit out of his magical hat and pilot Jet out of its nosedive? Now, that’s a billion-dollar question.