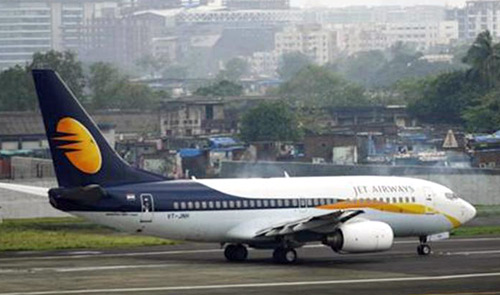 08 November, 2014
Print this article Font size -16+
Jet Airways is all set to fight it out in the Indian aviation industry. On Thursday (18 September), the airline announced that it would launch full-services even on its all-economy subsidiary JetKonnect from December for countering the threat from Tata-SIA Airlines’s Vistara airline, which is yet to be launched. Naresh Goyal-controlled airline also plans to consolidate into a single-brand by phasing out the low-cost flights.

Full service product with complementary meal service would be provided on all domestic flights from 1 December, with the buy-on-board concept being discontinued, an airline statement said. The announcement was in line with its recent announcement of a uniform ‘single brand’, with Jet Airways commencing streamlining and aligning its domestic operations into “a single full service product to provide an enhanced and consistent product experience,” the statement said.

“As the first of many upcoming initiatives, all guests booking flights on or after 15 September for travel on or after 1 December will enjoy the full service experience onboard all Jet Airways and JetKonnect-operated flights across the domestic network,” it said. It added that the ‘Sky Cafe’ or Jet’s buy-on-board service would be discontinued. Passengers currently booked on JetKonnect flights (holding flight numbers starting with S2), for travel from 1 December would enjoy complementary meals, the statement added.

Industry sources said the move comes in timely as Air India, after joining Star Alliance, has enhanced its on-board product offerings and the new full-service airline, Vistara, getting ready to launch its flights in the next few months. With its first-quarter losses narrowing this financial year, Jet’s board decided to exit the low-fare segment and phase out its JetLite and JetKonnect or all-economy flight brands by the end of 2014. All Jet Airways flights would also have two-class cabins instead of having a single-class configuration now existing in its no-frills subsidiaries.

Debt-ridden Jet, India’s second largest airline by market share, has drawn up a three-year strategy to lead the company to profitability. As part of the strategy, the airline will phase out its low-cost carrier JetKonnect and focus on full-service airline; replace its high-cost borrowings (in the Rs 9,800-crore debt) with low-cost funds; and share the infrastructure including the aircraft with partner Etihad.

Naresh Goyal said on 11 August that the airline would take tough measures to operate in today’s challenging industry. Jet’s net loss in the three months ended 30 June has been reduced to Rs 217.6 crore from Rs 355.4 crore in the year earlier. Still, it was the airline’s sixth consecutive quarterly loss because of its high operational costs and competitive ticket pricing. Sales rose by 17 per cent to Rs 4,685.6 crore.
Tags assigned to this article:
aviation more 4 jet airways naresh goyal vistara jetkonnect
sentifi.com