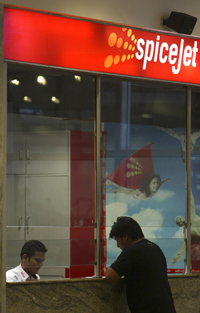 08 November, 2014
Print this article Font size -16+
Jet Airways and its smaller rival SpiceJet reported quarterly losses on Friday as fare increases were not sufficient to cover high costs of operations. Jet, which has agreed to sell a 24 per cent stake to Gulf carrier Etihad in a $370 million deal, was optimistic of demand growth and said airlines were regaining their pricing power.

Airlines in India have increased fares in recent months after Kingfisher Airlines, once the country's No.2 carrier, stopped flying last October, burdened by its high debt and as its flying licence was suspended. But high fuel costs and airport taxes, and a weak local currency still pose problems, and both Jet and SpiceJet cited these factors in their statements.

Jet said in a statement on Friday its planned deal with Etihad would bring "immediate revenue growth and cost synergy opportunities" and help strengthen its balance sheet.

Etihad's investment in Jet is the first by an overseas operator in an Indian airline since ownership rules were relaxed and provides Jet with a deep-pocketed global partner as well as cash to retire debt.

Jet shareholders approved the deal at a meeting in Mumbai on Friday, a senior company executive said, but a proposal to change the company's rules for operations, or the so-called Articles of Association, was deferred as the company awaits regulatory clarity. The deal is yet to win approval from Indian regulators.

Total revenue for the country's No.2 carrier by domestic market share, fell to Rs 4,484 crore from 4,634 crore a year earlier. Jet said its fourth-quarter results included a one-time impact of Rs 310 crore, mainly due to payroll arrears, maintenance and foreign exchange losses.

SpiceJet, ranked No.3 by local market share, said net loss for the three month to March narrowed to Rs 186 crore from Rs 249 crore a year earlier. SpiceJet however saw its revenue for the quarter rising 31 per cent from a year earlier to Rs 1,456 crore as number of passengers grew by a fifth.

"We continue to be confident of the future," SpiceJet Chief Executive Neil Mills said in a statement, hoping the company's expansion on international routes will

Ahead of the results, Jet shares closed 4.3 per cent lower, but SpiceJet gained 2.6 per cent in a Mumbai market that ended 0.3 per cent higher.