Jehangir Pocha: The Star In Our Midst 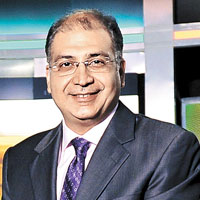 08 November, 2014
Print this article Font size -16+
I first met Jehangir Pocha in 1990, when we both entered Mumbai’s SP Jain Institute of Management and Research. I didn’t know then our paths would cross several times, over the next three decades, as he broke one rule after another during his unconventional, yet brilliant career.

Even in those early days, he stood out from the rest of the class. He had an amazing sense of humour, was a great storyteller and loved a good debate. He was SP Jain’sbiggest star at all inter-business school competitions, winning prizes in debating, and many other categories. He could charm attractive women across our campus. He rarely competed for top grades, didn’t enjoy heavy quant-based courses and believed in the value of a good, liberal education in broadening one’s mind.

When we graduated, Jehangir and I were handpicked by Hindustan Thompson Associates (HTA), which was then India’s premier ad agency. The stint proved nothing what we had imagined it would be. There was little intellectually stimulating work. Much of what we did was run up and down Lakshmi Building in Mumbai’s Fort area, getting artists to complete a pile of artworks in record time. Neither for us stayed there.

I quit advertising a few months before Jehangir did. He moved to the US to pursue a career with technology major Unisys, and I took my first, uncertain step into business journalism. We lost touch for most part, as he moved from the US to Singapore to head marketing for another software company. But every time he came back to see his mother and his family on his occasional trips to Mumbai, we’d catch up at his sprawling apartment near Breach Candy.

After returning to Mumbai in 1998, he pottered around for a while at an investment bank. But I never got the impression it was something he enjoyed. Destiny had something else in store for him.

In 1999, Jehangir went to Harvard to study foreign policy at the Kennedy School of Government. Around the time he got back, I was working on a cover story for Businessworld on the Pallonji Mistry family. Even though they were the largest shareholders at Tata Sons, little was known about them. No one had attempted to tell their story and how they had come to own a chunk in such a sprawling empire.

Jehangir knew the complex web of relationships and history that defined the Parsi entrepreneurial story. I remember listening intently in the balcony of his home, as he narrated the history of the Tatas, pointing out specific buildings in the vicinity where momentous events had taken place. Those nuggets were invaluable in reconstructing history because until then, it was almost as if someone had deliberately smudged out the Mistry family from the official biographies of the Tatas.

Perhaps this modern-day chronicler in Jehangir came to the fore soon after, as he embarked on the most adventurous chapter in his life: moving to Beijing as a global correspondent at The Boston Globe. China was making its presence felt. And he took it upon himself to unravel the mysteries of that mammoth economy, market and society. It was an expensive place to live on a stringer’s salary. And so, I developed a plan with him to cover China for Businessworld. When Tony Joseph, our editor then, received his pitch, he immediately agreed to a regular feed of stories that would help Indian readers understand China.

Right from the engrossing opening cover piece on how to do business in China, it was an amazing body of work. Jehangir brought to life different facets of the China story — how its big cities were pushing out the poor, the looming water crisis, the surge of the big Chinese brands that were headed to the West...all written with colour and detail. Many stories carried risks. Often times when he called me, he’d surprsingly switch into speaking in Hindi. Later I learnt his phones were tapped and the Chinese authorities monitored his internet activity. Jehangir didn’t care a damn — and continued filing stories for us and other leading publications across the world.

Just when you though he had found his mojo, life took a different course. Many of us moved out of Businessworld around 2005. And two years later, Aveek Sarkar decided to invite Jehangir to take over as Editor of the magazine. It was a bold move, given that he had never worked inside a newsroom. But then, this wasn’t the first time Sarkar had picked an untested editor. Jehangir was back in Delhi steering the ship, rebuilding the team — and putting together a stronger philosophical underpinning that had gone missing.

He had many detractors. In the hidebound environs of Delhi media, not many people understood his new-fangled ideas for the newsroom, his obsession with China’s economic model, his accent on a broader, global perspective shaping our work as journalists or even his ideas on magazine design. I remember hearing that even the then Finance Minister P Chidambaram once got annoyed with him for arguing with him on some economic policy issue during a post Budget interview. Even though Aveek Sarkar may have heard these voices of dissent, he continued to support Jehangir. He allowed him to bring in global designers and trainers to work with the team — and upgrade skills and standards.

But soon, his own ambitions for the magazine began to outstrip the ability of the somewhat somnolent business system at ABP. They simply couldn’t see eye to eye on the pace of the scale-up. Neatly conceptualised events would go abegging with sponsors. Investments in digital would be woefully inadequate. And hirings would take ages to happen.

That may have provided the springboard for Jehangir’s final adventure: as co-founder of his own venture. After patiently waiting for ABP to play catch up, he chucked it all up to team up with the promoter of Nai Duniya to make an audacious bid for NewsX. Just before that, Jehangir told me that he had the backing of several leading industralists. But when it came to putting up the money, many of them disappeared. Eventually, he raised money and started running it. Despite his best efforts, the channel did not deliver results and it was put on the block.

Congress politician Vinod Sharma’s younger son Kartikeya took over and Jehangir was asked to continue as Editor-in-Chief. It may not have been an easy transition. But NewsX stuck to its core news agenda, eschewing the shrill prime-time debates that dominated the air waves. This was a tricky period, and I am not privy to everything he had go through to save jobs and offer a sense of continuity to his team.

Around December 2011, the Tata group picked Cyrus Mistry as Ratan Tata’s successor. I was into my third year as founding editor of Forbes India and couldn’t think of anyone better to script the back story of the two families over the years. It was meant to be a sharp 1,000 word piece. In less than a couple of days, Jehangir wrote a defining story. He sheepishly told me after he started, he couldn’t stop writing all night. What emerged was 4,500 words from a master craftsman — and we didn’t have the heart to edit even a wee bit of it. The piece eventually won an award for Best Feature Story at the Red Ink Press Club Awards the next year.

While the transition was on, Jehangir did not give up trying to dream up new ventures. But money had almost dried up in the media industry. We would often talk on the phone and lament the declining fortunes of our profession. He now had a family to look after as well. Perhaps, that curbed his natural instinct to take risks. If images attached to his Facebook posts were any indication, he had quietly begun enjoying his family life.

Earlier this week, I got a call from him. He sounded agitated. Venture capitalists had promised him they’d step in after the elections. But they hadn’t to back his plans. He wanted to bid for some distressed media assets in play. The frustration was beginning to creep in. “I’m completely frustrated with the Indian system. I’m dying to go abroad,” he told me. I told him we should catch up for a drink the next time he was in Mumbai and talk this over. That meeting never happened.

Today, I’ve lost a dear friend, a confidant who was willing to offer advice whenever I needed — and a fellow professional smitten by the story-telling bug.

Jehangir, I will miss you dearly. May your soul rest in peace.

(The author is a senior journalist and the founder editor of Forbes India magazine)
Tags assigned to this article:
more 4 media and entertainment obituary businessworld jehangir pocha indrajit gupta