New Delhi [India], February 2 (ANI): Professing her love for India, Bollywood actor Janhvi Kapoor treated fans with her happy pictures from a fort on Tuesday.
Kapoor posted multiple photos on her Instagram and shared about the affection for her motherland. In the series of pictures shared by the 23-year-old star, she is seen roaming in a fort and adoring its heritage.
With the post that garnered more than two lakh likes within a few hours, the actor said that she has ventured to the far corners of the world, however, it is India that takes her leap with euphoria.
The photos see Kapoor sporting a cozy chic winter style where she donned a pullover with grey-blue warm trousers. She completed her look by accessorizing it with reflective sunglasses and teaming the outfit with a bright blue woolen muffler and mustard coloured boots. 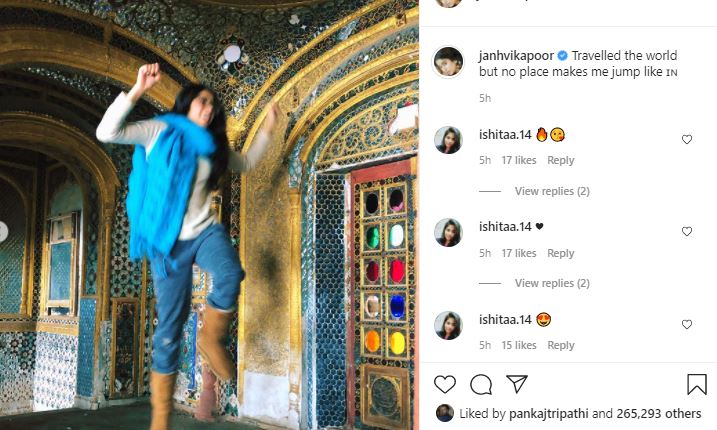 Taking it to the caption, the 'Dhadak' actor noted, "Travelled the world but no place makes me jump like IN".
On a professional note, Kapoor who was last seen in 'Gunjan Saxena: The Kargil Girl,' will be next seen starring in Aanand L Rai's 'Good Luck Jerry' in the lead.
Presented by Subaskaran and Aanand L Rai, 'Good Luck Jerry' is a Colour Yellow Production with LYCA Productions in association with Sundial Entertainment, directed by Sidharth Sengupta and written by Pankaj Matta.
The first schedule of the film is expected to continue till March. It marks Janhvi Kapoor's first collaboration with Colour Yellow Productions. (ANI)