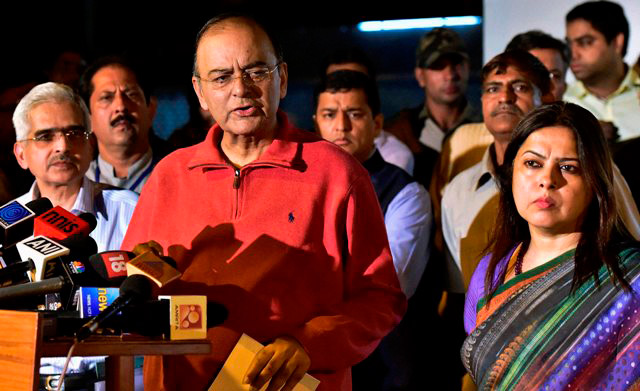 05 February, 2015
Print this article Font size -16+
The NDA government on Friday (30 January) indicated it will take a fresh look at environmental clearances for projects granted or rejected by the previous UPA government in the light of former Union Minister Jayanthi Natarajan's allegation of interference by Rahul Gandhi.

Union Finance Minister Arun Jaitley sought a review of environmental projects approved or rejected during the UPA rule after former Environment Minister Jayanthi Natarajan accused Rahul Gandhi of interference in clearang projects.
Natarajan in a letter to Congress chief Sonia Gandhi alleged that she had received specific requests from Rahul on environmental clearances and consequently had rejected big projects.
"I received specific requests (which used to be directives for us) from Shri Rahul Gandhi and his office forwarding environmental concerns in some important areas and I took care to honour those requests," Natarajan says in the letter.
Jaitley said the letter "conclusively establishes" that it was not the rules that mattered to the Congress but only "whims" of the leaders.
"I hope the Environmental Ministry now will go into each of these permissions which were granted and not granted and make sure that these are expeditiously dealt with only as per law and no other consideration," Jaitley said.
Jaitley said during the UPA rule, the growth rate was radically going down and one of the prime reasons for that was delay in project approvals.
'Sadistic Economy'
In a scenario where whims overtake legal requirements, it becomes a textbook case of "crony capitalism, which the UPA was practising," he said.
Jaitley said that it was a practitioner of a "sadistic" economy which was vindictive in nature, wanting to teach some people a lesson while wanting to favour some others.
"This obviously had to be for corrupt and collateral reasons," he charged.
Reacting to the controversy, Environment Minister Prakash Javadekar said he would review the files where allegations of extraneous influence have been mentioned.
"The revelations made by Jayanthi Natarajan in her letter to Sonia Gandhi, which have become public today, are a matter of great concern and is a serious issue," Javadekar said.
"I will definitely review those files and see what are the facts," Javadekar said.
Congress leader Jairam Ramesh, who was environment minister before Natarajan, on Friday rubbished her allegations as "preposterously baseless."
Ramesh said: "As Jayanti Natarajan's immediate predecessor for slightly over 25 months, I can say with all honesty that at no point of time did Rahul Gandhi ever tell me, directly or indirectly, what to do or what not to do in the discharge of my ministerial responsibilities. Her allegations against him are not just completely unfair but also preposterously baseless."
M Veerappa Moily, who succeeded Natarajan in the Ministry, said Rahul Gandhi had never interfered in the functioning of the ministry.

He said in Bengaluru that neither Rahul nor Sonia Gandhi had any clamour for power and that is why they remained out of government.

"Soniaji could have become the Prime Minister thrice...

Rahul ji also could become the Prime Minister anytime," he said, adding both, however, chose to remain away from government.

Congress spokesman P C Chacko said Natarajan has made the "wild allegation" against the party Vice President with an "ulterior motive."
Natarajan has quit the Congress, saying she cannot continue in the "suffocating atmosphere".
The four-time Congress MP's decision has added to the woes of the Congress and triggered a barage of attack by BJP leaders against the party.
Natarajan is the second leader in Tamil Nadu to quit the party after G.K. Vasan who has already floated a party.
(Agencies)
Tags assigned to this article:
politics environment upa congress rahul gandhi sonia gandhi jayanthi natarajan othertop1 prakash javadekar