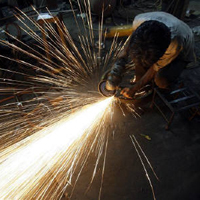 Among the other firms interested, is steelmaker Jindal Steel and Power, a firm run by Member of Parliament Naveen Jindal, brother of JSW Steel's boss Sajjan Jindal.

Their late father, businessman and politician Prakash Jindal founded the Jindal group, a steel and power empire made of various companies that Naveen, Sajjan and their two brothers now run.

"We are in talks but nothing has been finalized. We sent a letter to Stemcor to convey to them interest," said a source at JSW who spoke on condition of anonymity.

A JSW spokesman said he would not comment on any specific proposals but added:"JSW Steel's business strategy is to increase its backward integration in securing iron ore and coking coal to feed its steel plants in India. The company continuously scans and evaluates various proposals of strategic interest."

Stemcor, the world's largest independent steel trading company and the fifth-largest private company in Britain is undergoing a restructuring phase.

The firm, controlled by the Oppenheimer family, has come under pressure from lenders to sell some of its assets to raise cash, since it failed to refinance a $850 million syndicated loan that was due to mature in May.

Stemcor appointed Goldman Sachs to find a buyer for its Indian assets which include a iron ore mine and iron processing facilities in the state of Odisha, valued by an industry source at about $700-750 million.

Goldman Sachs was not immediately available to comment on the appointment.

Jindal Steel and Power CEO Ravi Uppal said in an interview on Tuesday that it sees its iron ore needs trebling by 2015 and confirmed its initial interest in the Stemcor assets.

"The whole thing is at a very early stage. We are looking how this proposal makes sense to us," he said.

JSW posted revenue of about $6.4 billion in the latest financial year while Jindal Steel and Power registered a turnover of about $3.3 billion.

Stemcor, which trades between 15 million and 20 million tonnes a year of steel and steel raw materials, including coal and iron ore, posted a 5.1 billion poundsturnover last year.