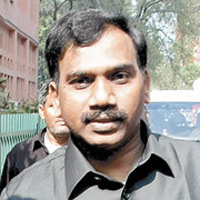 08 November, 2014
Print this article Font size -16+
The JPC has given a clean chit to Prime Minister Manmohan Singh on 2G spectrum allocation, saying he was "misled" by the then Telecom Minister A Raja whose assurances stood "belied". The draft report of the JPC also rubbishes the loss figure of Rs 1.76 lakh crore estimated by CAG, saying it was "ill-conceived".

The report, which was circulated among members today before its adoption on April 25, also accuses Raja of forging the press note of January 7, 2008 after it was seen by the then Solicitor General G.E. Vahanvati.

"The Committee wish to point out that the procedure" regarding the First-Come-First-Served (FCFS) criteria was a "misrepresentation of facts and in tactic deviation from the existing procedure," it says.

While giving sequence of events leading to allocation of 2G spectrum, the report says, "the Committee are inclined to conclude that the Prime Minister was misled about the procedure decided to be followed by the Department of Telecommunications in respect of issuance of UAS licences.

"Further, the assurance given by the Minister of Communications and Information Technology (Raja) in all his correspondence with the Prime Minister to maintain full transparency in following established rules and procedures of the Department stood belied." .

The draft report, which is expected to generate much heat in the next JPC meeting, suggests that there is nothing against Finance Minister P Chidambaram with regard to decisions taken by the Telecom Ministry on 2G allocation.

On the controversial press release issued just before the licences were allocated, the JPC report quotes the CBI to say that the January 7, 2008 press note was "forged by the Minister of Communications and Information Technology" (Raja) with later inclusion of words "press release appd (approved) as amended".

"The CBI has claimed to have forensic evidence to substantiate their finding in this regard," the report said.

On the government auditor's loss figure of Rs 1.76 lakh crore, the report said "the Committee are of the considered view that the very move for calculation of any loss on account of allocation of licences and spectrum is ill-conceived.

"It is imperative that the calculation of loss to the exchequer on account of allocation of licences and spectrum has to be viewed in the context of the overall policies laid down for the telecom sector from time to time...," the draft report said.

The 30-member JPC, set up in March 2011, noted that though there were a number of recommendations on spectrum pricing made by TRAI or committees set up by government as well as views expressed by the Finance Ministry and the PMO, "there was no policy decision taken by the government in favour of auctioning of 2G spectrum."

It said, "most of the time, TRAI, the Department of Telecommunications, the Ministry of Finance and the Planning Commission favoured maintaining of reasonable spectrum price so as to make available telecom services at affordable price and ensure level playing field among service providers using various technologies." .