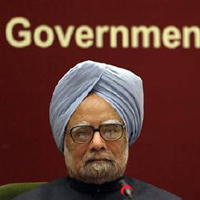 08 November, 2014
Print this article Font size -16+
As expected, a political storm broke out on Friday, 19 April 2013 over the draft JPC report on 2G scam with former Telecom Minister A Raja claiming that all decisions were taken in consultation with Prime Minister Manmohan Singh and the BJP accusing panel chief P C Chacko of trying to save the government.

Chacko, however, sought to defend the draft report authored by him giving clean chit to the Prime Minister and Finance Minister P Chidambaram, saying it was based on the terms of reference which covered a ten-year period.

"We have to go in a chronological order...it is not that we are targeting one person or period," he said adding that Joint Parliamentary Committee (JPC) members should look at the draft on the basis of merit and not with a "political mind".

Raja, who has been charged in the draft report with misleading the Prime Minister on 2G spectrum issue, maintained he had done everything in consultation with Prime Minister Singh and would send a detailed note in his defence to the panel next week.

BJP said the draft report was an effort to protect the Prime Minister.

"The draft report looks like a Congress document and not a JPC report in which there is an overpowering desire to save its leaders including the Prime Minister and the Finance Minister in the 2G scam," party leader Ravishankar Prasad said in Delhi.

Telecom Minister Kapil Sibal said the report is not yet finalised and requested the media and the opposition to refrain from speculation.

"The JPC report is yet to be finalised. JPC is going to meet, and once it is finalised, it shall be presented to Parliament. And that's the time we all shall debate it," Sibal said.

DMK chief M Karunanidhi took a dig at the draft JPC report saying, "How can one believe that a minister misled the Prime Minister?"

Asked whether he would give any advice to Raja on the issue, Karunanidhi told reporters in Chennai, "He was a minister of the department. I don't have to give him any advice that he doesn't know. Justice should be given in the right way."

Terming the leakage of the draft as a "gross breach of Parliamentary propriety", BJP said its contents appeared like Congress documents where attempts have been made to save its leaders including the Prime Minister.

"The media showed the JPC draft report on 2G scam extensively. This is a gross breach of Parliamentary propriety where any report draft is debated, discussed, amendments are moved in the formal meeting and thereafter views are taken," BJP's Ravishankar Prasad said.

Sibal said both media and the opposition should refrain from speculating and wait for "a proper debate" within and outside Parliament.

The minister said, "We are now committing the same mistake as we did in the past. Without the CAG submitting its report to Parliament, the opposition started protesting, newspapers started writing well in advance and leakages of the report made public discourse very difficult."

Responding to opposition's attack on the draft, JPC chief Chacko said, "The anger was anticipated."

He said the members should not examine the draft report with a "political mind" but go on the basis of merit.

He also said the draft was a "good job" as no other committee in the past decade has "done this much work".