Ganderbal (Jammu and Kashmir) [India], Aug 2 (ANI): A section of people in Jammu and Kashmir depends on the horticulture sector for their livelihoods and grape cultivation is a major source of income for many families in the Valley. One such place is Ganderbal, popularly known as the 'district of lakes', which has now become the hub of grape cultivation after the implementation of the Rashtriya Krishi Vikas Yojana.
After the state was made a Union Territory last year, there have been marked improvements in the horticulture sector under the centrally sponsored Rashtriya Krishi Vikas Yojana, and grape cultivators say that the quality and quantity of the crops have since seen a lot of improvement.
"Developmental activities are taking place under the Rashtriya Krishi Vikas Yojana by the central government. After getting the Union Territory status, the government has been showing more interest in the development of the Valley and has been sanctioning adequate funds for the benefit of the growers and overall promotion of the horticulture sector in the Valley," Manzoor Ahmad Bhat, the Chief Horticulture Officer in Ganderbal said. 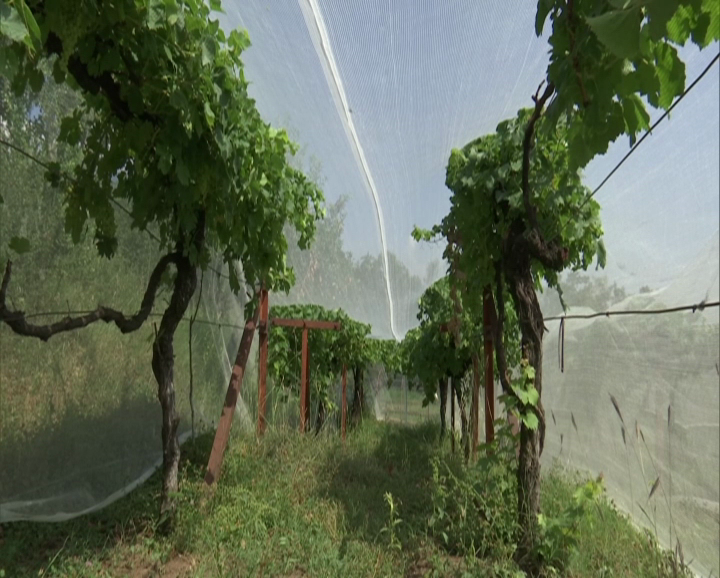 According to Mudasir Ahmad, a grape farmer in Ganderbal, many people in the Union Territory rely on the horticulture sector for their livelihoods and earn their living through the cultivation of different fruit crops, one of them being grapes.
"The new bowler and the netting systems introduced by the Ministry of Horticulture will protect grapes from damage during hail storms and bad weather. These have both been given to us at a subsidised rate and we hope to see higher quality and quantity of grape production from now on." Bhat told ANI.
According to Abdul Hamid, another grape farmer in the district, iron rods were also provided to grape farmers for their vineyards at a subsidy under the scheme, which will reduce the maintenance required and increase the efficiency of grape cultivation.
"Traditionally, we use wooden sticks to support the grapevines but those need to be constantly checked and taken care of. They need to be replaced every year and this tedious maintenance process greatly affects the output. The government has given us iron rods at a subsidy to use in our vineyards and we hope that this will greatly increase production," Hamid said.
August 5 will mark the one-year anniversary of the abrogation of Article 370, which gave special status to the erstwhile state of Jammu and Kashmir and bifurcated the region into two Union Territories - Jammu and Kashmir, and Ladakh. (ANI)