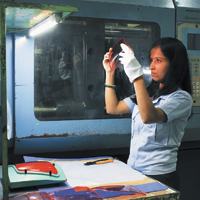 One year on from the shock slump, it is painfully bad — yet heartwarmingly good — to travel the Delhi-Jaipur highway. Bad because travelling the Gurgaon-Manesar auto belt has once again become a hardship due to traffic congestion. Good because the return of the packs of trucks loaded with cars and motorcycles and assorted auto parts is the sign of an economic recovery. A year ago, this usually busy stretch had turned a bit desolate, as auto companies in the area cut production shifts, took frequent shutdowns and even laid off people.

The fortunes of the Gurgaon-Manesar auto belt reflect the consumers' mood, and also that of the banks, as the area produces around half of all the cars and two-wheelers sold in India. The anchor automakers in this region — Maruti Suzuki and Hero Honda — are the market leaders in their respective segments, cars and motorcycles, with each having about 60 per cent of the market. In addition, there are also a couple of up-and-coming producers of two-wheelers such as Honda Motorcycle and Scooter India (HMSI) and Suzuki Motorcycle India that together account for about 12 per cent of the two-wheelers market.

These companies have led the revival of the auto market in the country — with nearly 30 per cent average growth in sales since July this year amongst them. The sales momentum has sustained during September, and even after the festive season binge buying, sales are expected to be steady.

Bad Ride Over?
The resurgence in auto sales has removed the pall of gloom hung over the ancillaries for over six months starting October 2008. The rocketing sales have brought back profits for them (see ‘They Are Riding On'). The units are feeling assured enough to contemplate fresh investments to raise capacities for the existing vehicles and for the new vehicles planned by the automakers. "There is a sea change in the mood in the area from October-December last year, when everybody feared the end of the world was near," says Arvind Kapur, managing director Rico Auto, a key supplier of cast metal parts to Maruti Suzuki and Hero Honda. "Our factories are running at full capacity, and we are even considering expansion," says Sunandan Kapur, managing director, SKH Metals, which is part of an ancillaries group that supply parts such as seats, mirrors, fuel tanks and axles to Maruti Suzuki. It sells nearly 85 per cent of its output to that company.

Lumax Industries' director, Deepak Jain, thanks the fact that the Gurgaon-Manesar belt is almost exclusively reliant on the passenger vehicles industry, which has revived much quicker than the commercial vehicles industry largely located in the west and the south of the country. Jain attributes his company's losses last year to the sudden crash of the auto sales in October-December, and a slow pick up in the early part of the recovery in January-March. "We invested Rs 200 crore to expand capacities based on the demand projections and new vehicle launches planned by the automakers. Suddenly, we were reduced to using only 40 per cent of our new capacity," he says.

But fallen sales, combined with increased finance and depreciation charges, pulled down the financial performance of not only Lumax but many other major ancillaries in the area, including Sona Koyo Steering, Rico Auto and Omax Autos. "But now things are much better, and our capacity utilisation is up at 70 per cent," says Jain. He hopes to expand further next year to hold on to his 60 per cent market share in the automotive lighting market.

Cautious Drive Though
However, the mood among the ancillaries is not that of jubilation but of relief. "We need to see sustained growth in demand for a couple of more quarters, and a revival of the export market before we can breath easy," says Jatinder Mehta, managing director, Omax Auto. His company took a big hit last year. It had a big exposure to American and European auto part buyers, with nearly one-third of its sales coming from exports. "Last year, we had confirmed export orders worth Rs 250 crore, but we ended up doing only about Rs 30 crore. The western auto companies were hit by recession," he says. This year, Mehta has diverted the export capacity to sell in the domestic market, and still he expects half that capacity to remain unutilised in spite of adding Rs 100 crore from additional domestic sales.

Surinder Kapur, chairman, Sona Koyo Steering, points out that the ancillaries have been jolted out of their dream of unstoppable fast ride to growth. The outbreak of the global financial crisis, and the resulting panic have made the ancillaries cautious. "There was some really silly growth and optimism from 2006 to early 2008," says Kapur. "The recovery that we are seeing now would be more tempered over a long stretch of time."

The slump also made and spoilt the vendor-OEM (original equipment manufacturer) equations. While all automakers cut component offtake and delayed introduction of new models, not all came out of the crisis with their credibility with vendors intact. Maruti Suzuki was among those whose stock went up considerably with their vendors. "Though Maruti also cut its offtake for a couple of months, it promptly made up for that as soon as things started improving," says Jain of Lumax.

According to S.Y. Siddiqui, managing executive officer, administration (HR, IT, finance), Maruti Suzuki, the company shepherded its flock of key vendors during the panic phase. "Many key vendors became so jittery that they started throwing out trained manpower and cutting costs to the bones. You cannot undo such things in a hurry," he says. "We ensured a certain minimum orders on the vendors during the bad phase, and paid them early to help their cash flows," he says.

But not all ancillaries in the area are closely linked with the gravity-defying Maruti Suzuki or Hero Honda. Federal Mogul Goetze India, for example, laid off more than 1,000 people, nearly 15 per cent of its workforce, between its Bhiwadi and Bangalore plants. The company has greater exposure to GM India and Tata Motors than most other ancillaries in the Gurgaon-Manesar belt. Since the slump, the ancillary is trying to automate more. "We have switched to cost-targeted production now," says Jean de Montlaur, president. "We have reworked our production system to allow us to increase or decrease production and labour at will."

There is a growing preference for work-station production over line production in this belt. This allows ancillaries greater flexibility to fine-tune their production and labour count by activating, or deactivating, workstations according to orders.

Moreover, most ancillaries have lowered their breakeven points since the slump. Significant cost savings have been achieved by reducing outsourced services, tightening inventory levels, reducing non-critical staff, freezing salaries and hiring, and reducing the metals, rubber and plastics used in the components. "Today, while revenue growth may be modest, profit growth is high this year," says Jayant Davar, managing director of Sandhar Technologies. "For us, the Ebitda up to August is higher by 50 per cent, though sales are up only 27 per cent," he shares.

The Red Signal
But now there is a new threat to the auto ancillaries here — a rash of trade union activity. In the past couple of months, seven ancillary units in the area saw strikes — including Rico Industries and Sunbeam Auto — key suppliers to Hero Honda and Maruti. "The labour rumblings could hurt the recovery and the exports, as the orders being considered for India could go to Chinese companies," says Davar, who led a delegation of the Automotive Component Manufacturers Association of India (ACMA) to Europe in September to seek orders for the Indian ancillary industry. "Unionisation is becoming a big challenge here," he says. Sanjay Mehta, vice-president, Lumax DK Auto Industries, fears if the unions were not contained, Gurgaon-Manesar belt could meet the fate of Faridabad — the original Motown of Haryana where excessive union activities in the 1980s and the 1990s ensured that auto industry grew elsewhere in the state.

But the ancillaries are not panicking over the issue. The help from the local administration in preventing complete stoppage of production is reassuring for them. Local police has been stationed at Rico Industries and Sunbeam Auto factories to ensure that the workers who want to work can work. In fact, their customers are ensuring that their supplies are not interrupted —by sending their workers to run the lines.

The labour has been disciplined so far. The striking workers sitting outside the gates of Rico and Sunbeam are not blocking the factory gates, and they have volunteers ensuring smooth flow of the traffic that passes their sitdown area. "The promoters and the local administration are trying to prevent formation of unions among workers, and want to restrict their representation to committees. That is what we are protesting against," says Sunil Kumar, an operator at Sunbeam, and a cheer leader among the striking workers.

But the companies are riding on. "The resurgence of the auto market is the main focus for us. We are hiring and investing again," says Nirmal Minda, managing director, Mindarika. "We are ramping up production and capacities. The demand has shot up. We are looking at a 30 per cent higher production in FY10 than we had budgeted earlier— 15 per cent lower than the production in FY09," Minda says. Barring an escalation in the union activities or another shock slump, the Gurgaon-Manesar ancillaries look set for a good ride for some time to come.