It’s All In The Game 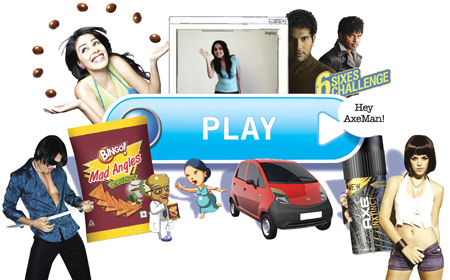 A prank by an anonymous programmer was  perhaps the first instance of a brand woven into a game, an advergame, to be precise. In 1973, Digital Equipment Corporation launched the game ‘Moonlander' to display the capabilities of its new graphics computer terminal. If a gamer made the right choice, the astronaut ordered a sumptuous Big Mac from a McDonald's restaurant. A wrong move had him air-crashing into the restaurant and greeted with a tongue-in-cheek message, "You clod! You've destroyed the only McDonald's on the moon!" McDonald's was quick to realise that it had stumbled upon something powerful.

By early 1980s, FMCG giants Kool-Aid and Pepsi were funding and distributing Atari games. Taking a cue, Coca-Cola, General Foods,  Johnson & Johnson and others made a beeline for video games. Since then, things have only got bigger. Computer market research firm Yankee Group expects the advergaming industry to garner revenues worth $312.2 million (around Rs 1,477 crore) in 2009.

In India, too, the evolution has been from in-house games that attract visitors on company websites, to commercial video games reflecting a brand's personality, to advergames that seamlessly integrate a product into the game.

On The Mark
Gaming portals are virtually sitting on a pot of money. The 2009 KPMG-Ficci Media and Entertainment Industry Report pegs the overall gaming market (gaming on mobile phones, consoles, PCs and online) at Rs 650 crore in 2008 (see ‘Click To Reach' on page 41). By 2013, it is expected to grow to Rs 2,740 crore, a CAGR (compounded annual growth rate) of over 33 per cent. Reliance ADAG's Zapak.com, Indiagames.com, Contests2win.com, Jump Games, Hungama Mobile and Kreeda Games are some of the major players in the fray.

The Next Level
Raj Menon, chief operating officer of Contests2win.com, says, "Advergames are designed around the attributes of brands. Consumers can ‘virtually' touch, play or experience the brand." A game is created in such a way that consumers need two or three attempts to crack it. On an average, a consumer spends 3-5 minutes on a game that is brand-heavy. "Simple games cost Rs 3.5-5 lakh while complex video advergames can cost up to Rs 10-12 lakh," says Menon.

ICICI Prudential Life Insurance has tied up with Contests2win.com to create a series of games, which drive home the point that procrastination is expensive. The insurer's mascot, Chintamani, dons different guises (a doctor, a gym instructor and a dietician) to understand a consumer's medical and financial history and suggests a suitable policy.

Arun Mehra, chief marketing officer of Zapak.com, says, "We have tie-ups with over 250 brands and make three-four advergames a month." The company recently created advergames for Cadbury India's Perk, ‘Perk Poppers', that has seen over 1.3 million gameplays.

Cadbury India is clear about the role of advergames for its brands. "For Perk, we wanted games that were simple and would still allow teens in metros (our target group) to play, while weaving in thought multipliers on the brand," says Sanjay Purohit, executive director of marketing. The brand elements added to the fun by not intruding into the ‘play space'. "While traditional media help us reach a bigger audience, advergames get us a larger share of consumer time. We will continue to look at all the opportunities in the digital medium."

On The Move
Advergaming on mobile phones, too, is on the rise. Samir Bangara, chief operations officer of Indiagames.com, which distributes mobile games in over 75 countries, says websites have traditionally adopted an ad-based revenue model for free content. Mobile brand-based games have been on the rise over the past year in India. "The sheer growth in the market, especially at the lower average revenue per user (ARPU) levels, has been a factor driving free content. Advertisers have begun to comprehend the power of games in facilitating interactivity, brand recall and brand affinity," he says.

The Way Ahead
Gaming industry mandarins project that advergaming will account for more than 50 per cent of the online gaming market's total revenue in the next 2-3 years. However, to optimise revenue from adverga-ming, content creators need to address skewed revenue-sharing agreements with mobile operators. In India, operators usually get 60-70 per cent of the revenue for value-added services (VAS) while content creators get only 15-20 per cent.

Another deterrent is high customs duties and indirect taxes, which make legitimate console hardware and software about 40 per cent more expensive than grey market imports. The biggest threat to PC games, however, comes from pirated illegal CDs at rock bottom prices.

Advergames, however, are still sought after.  Contests2win.com's Menon says, "Companies need to understand that advergames are tactical exercises whose shelf-lives are only a couple of months. Typically, games that are complicated, boring or too brand-heavy (the brand overshadows the game) do not take off. Games around popular passions — movies, music and cricket — tend to do much better."

Logitech's advergame ‘Web Charades', a hit with gamers when it was launched, uses movies to make gamers aware of its webcam features.

"‘Bingo Achaari Masti Attack' went down well with gamers as the unique concept of escaping from a pregnant woman brought a smile to their faces," adds Menon.

"Today, biggies and wannabes alike are getting onto the digital (online and mobile) bandwagon more out of a desire to not miss the bus than with a clear plan for leveraging the new media." Advergaming works best if the game is deeply interwoven with the product. This medium will work in the long term only if it creates opportunities to influence product sales. Says Halve, "And, like advertising in the traditional media, advergaming can facilitate in selling a product only if it is good and the game communicates the relevant linkage with the brand message to the consumer. Advergaming may be new, but the communication game is not."