It’s A Matter Of Faith 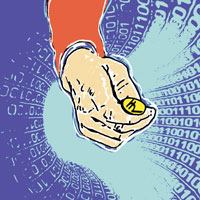 08 November, 2014
Print this article Font size -16+
In mid-2012, market analysts and observers wondered aloud if the mutual fund industry had reached its low point — redemptions had been increasing since 2011; markets continued to be volatile and investors appeared to be fleeing to safer asset classes like gold and bank deposits; and the distributor fraternity was shrinking.

But by the end of 2012, the story changed considerably: assets under management (AUM) increased (they were up 15 per cent or by just over Rs 1 lakh crore over the previous year to nearly Rs 7.8 lakh crore), and fund performance in terms of returns improved since 2011.

Large cap equity mutual funds returned nearly 28 per cent by the year-end, and small  and mid cap equity funds just under 40 per cent. Even fixed income and bond funds did very well, returning over 10 per cent. In a year when the economy fared rather poorly — GDP growth continued to decline for the third year running — the relatively good performance of mutual funds offered encouragement.

How does one explain the recovery between the middle and the end of the year? “Mutual fund performance is always linked to the underlying markets,” points out S. Nagnath, president and CIO of DSP BlackRock Asset Management. “In 2011, stockmarkets were down 25 per cent, and in 2012, they are up 26 per cent.” And that improved the performance of several mutual funds considerably.

According to Morningstar India, a firm that rates mutual funds, financial sector funds gave investors an average return of 59 per cent; the comparable benchmark index, the BSE Bankex, returned 57 per cent. FMCG (fast-moving consumer goods) funds delivered 48 per cent for the year; in 2011, too, FMCG funds beat the market. Technology funds, though, delivered just 6.3 per cent. Gold exchange-traded funds (ETF) lost some of their glitter too; after delivering a phenomenal 31 per cent return in 2011, they managed just 11 per cent in 2012.

Year 2012 has also been a year of flux. There have been changes in regulation, some consolidation, and some serious thinking within industry body Association of Mutual Funds of India, or AMFI, about coping with several challenges that face the industry.

Shaping Up, Shipping Out
Among the biggest changes has been the relaxation on expenses that AMCs (asset management companies) are allowed to charge. In a push to give mutual funds an incentive to go beyond the urban landscape of the 15 largest cities — what the industry calls B15 (beyond 15) — the Securities and Exchange Board of India (Sebi) has allowed mutual funds to charge a higher expense ratio (as a percentage of AUM).

“The potential out there is huge,” says Milind Barve, managing director of HDFC Asset Management, and also the current chairman of AMFI. “Even a shift of 1 per cent of savings into mutual funds means an additional Rs 40,000 crore or so into mutual funds’ AUM.”

A. Balasubramanian, CEO of Birla Sun Life AMC, concurs. “The regulatory framework is converging with the realities of getting the economic model right. Going to the B15 cities means we can spend more on investor education and strengthen distribution.”

Since the entry load ban and ceiling on expenses imposed a couple of years ago, distribution channels have been shrinking. Profitability has been moderate; the larger fund houses have posted profits — Reliance AMC was the most profitable, with Rs 256 crore in 2011-12 (FY12) — but most smaller players continued to bleed.
break-page-break
That has probably led to some consolidation. In April 2011, Benchmark AMC was bought by Goldman Sachs. Some large international players also entered the market. In 2012, L&T Finance Holdings bought Fidelity AMC; Invesco bought 49 per cent of Religare AMC; Schroders took 25 per cent stake in Axis AMC, and Japanese insurance firm Nippon paid Rs 1,450 crore for a 26 per cent share of Reliance AMC.

Whither Advisors?
While the B15 opportunity is huge, mutual fund houses also have a bigger challenge: retaining investors. Most heads of AMCs acknowledge that there have been nearly continuous redemptions by retail investors. Some analysts believe that retail investors have, in fact, given up on mutual funds almost entirely.

“That trend is almost typical investor behaviour,” says Vikaas Sachdeva, CEO of Edelweiss Asset Management, one of the smaller mutual fund firms. “Retail money tends to follow HNI (high net worth individual) money. This year, there has been a big increase in debt folios.”

Balasubramanian agrees. “There has been a consolidation of folios,” he says. “Investors with multiple accounts have been consolidated into one, and that will look like a reduction in (the number of) investors, but is (really) only a reduction in accounts.” But over all, mutual funds appear to have lost investors.

Part of the problem stems from the reduced number of independent financial advisors, an important link in the distribution channel. Most AMC CEOs we spoke to admitted that the industry’s growth is linked to growth of advisors.

“The industry may have been focused just on increases in AUM and that is unhealthy,” says Sachdeva of Edelweiss Asset Management. “It is a little like a model who keeps wearing higher and higher stilettos; at some point, she begins to lose balance.” Most other mutual fund CEOs agree, albeit grudgingly. They still point to the scale of the B15 opportunity, which could well be the next phase of sustainable industry growth.

Each One, Teach One
AMCs and the AMFI are seized of the problem of investor education and increasing the number of advisors. AMCs will set aside 2 basis points of AUM (about Rs 150 crore) to educate and create advisors who can sell easy-to-understand mutual fund products to potential investors in smaller cities.

But creating a remunerative business model for them is hard to develop under the present circumstances. The industry body and its members are all too aware of the ‘trust deficit’ among investors that the industry labours under. The solution: better and more investor education.

“Financial literacy is low,” says Barve. “In fixed income funds, for instance, the greater liquidity compared to fixed deposits is not highlighted enough. Nor is their greater tax efficiency due to indexation (returns on fixed income funds are more tax-efficient than interest income on deposits).”

So will 2013 be better? Sentiment appears to have changed, though most fund managers prefer to be guardedly optimistic rather than enthusiastic (they have been off the mark before). The economic environment will probably improve with structural reforms.

“In 2012, returns on equity across the world were positive, despite low growth,” says DSP BlackRock’s Nagnath. “Sure, the equity cult of the 1990s may have disappeared, but these are cycles. As interest rates come down (the Reserve Bank of India cut policy interest rates and reserve requirements on 29 January), markets will come back.” As one fund manager says, from his lips to God’s (and the market’s) ears.