It Was Always Burning 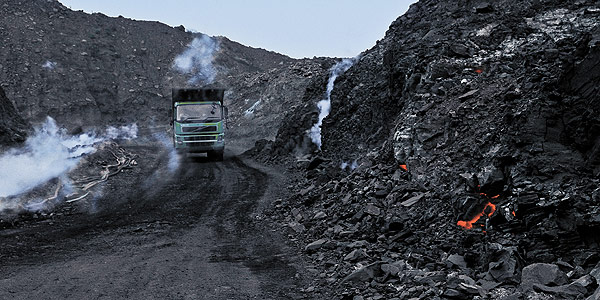 The coal ministry lists about 67 such fires at present. What caused the initial fires is debatable. The culprit could be unscientific mining methods prevalent at the time, spontaneous combustion or both. Mining in those days was open to private operators, who may have sacrificed safe procedures for bigger profits.

Usually, coal quality increases with depth. But the best quality coking coal in Jharia is found on the surface. BCCL chairman and managing director T.K. Lahiri's theory for the fires is that private operators mined the surface coal and moved on, leaving behind open and exposed mines. Coal's self-destructive nature came into play, with prolonged exposure to air causing the mineral to heat up and eventually ignite. Later, former mine workers and adivasis kept the fires alive to illegally distil liquor. When underground mining began, the fires spread inside. Also, there are theories that suggest the reverse — that the fires started with underground mining and are continuing with open cast.

By 1972, coking coal mining was nationalised. Unsafe mining and poor working conditions of mine workers forced the government to take over. Since then, it has been BCCL's responsibility to douse the fires (while maintaining maximum production of coking coal). BCCL took on 22 fire-control projects covering 70 fires. It spent around Rs 76 crore and was able to reduce the affected surface area from 17.32 sq. km to 8.9 sq. km. Ten fires were extinguished, while the remaining were brought under control, says a survey by the National Remote Sensing Agency (NRSA) in 1995-96.

It's the figures after this period that interest Ashok Agarwal, president of Jharia Coalfield Bachao Samiti (JCBS), an NGO that has fought for the issue since 1997. Sitting in his office barely 8 km from Lodhna, Agarwal offers an interesting theory. He says that not much has changed since the NRSA study came out. BCCL has not been able to extinguish any more fires. His explanation: corporate greed. "The basic idea is precious coal. You cannot make steel without Jharia's coking coal," he says.

Click To View A Slideshow On The Jharia Mines: Burning Fields
break-page-break
Agarwal says BCCL's open cast mining — a process that is unsuitable in Jharia's geo-mining conditions — is keeping the fires going. Jharia's coalfield has more than 40 coal seams that are narrow and run parallel to each other. Open cast mining in such places leads to the degradation of land and displacement of people, says Agarwal. Then why opt for open cast mining at all? "Basically, for cheap, quick coal. And in open cast, you can outsource your work to private organisations and massive amounts of money are made by all parties," he says. The formula, he says, is: create fire, scare people, evacuate them and gain millions of tonnes of coking coal.

CMRI's Singh agrees that open cast mining could be the reason for the fires. He believes the fires are advancing faster than the quarry face. Instead of chasing it from behind, trenches need to be cut and all coal on fire should be dug out to stop the advance of fire. This way, when the fire finally reaches the trench, no more fuel will be left in its path to burn, leaving those on the other side of the trench unharmed. Slow advancing open cast mining in the present form is creating pathways for air to flow inside. Once this air reaches the hot coals below, it aids the fire in its spread.

BCCL denies these allegations. "We have tried many methods (to extinguish the fires). (But) the only one that will be successful is digging  out the fire," says Lahiri. "(The fire) is so widely spread and there are so many cracks, breathing will always continue. Wherever we use open cast, the fires are doused permanently. We are making trenches to separate the fire and non-fire zones. The work in Rajapur started a few months back."

Time For Action
Rajapur is a colliery just 6 km away from Dhanbad. At night, the tall blue flames are visible atop the 10-feet-tall walls of coal. But work goes on non-stop. Huge cranes dig up the overburden (the waste or soil that lies above the coal and needs to be removed before the reserves can be reached) and trucks transport burning coal, as well as workers who, dwarfed by the size of it all and enveloped in dust, move around calmly.

A Kolkata-based company has been removing the overburden since 2011. Its employees, some of whom seem wary of the journalistic attention, are not bothered by the fires. Every few minutes a worker douses a fire with water, and instantly, he is lost in a cloud of acrid smoke. Workers say the site, which is located in a water-scarce town, uses up at least 50,000 litres a day to deal with the flames.

Many say the Jharia fires were allowed to fester for far too long. They began to make news only when MP Haradhan Rao filed a public interest litigation (PIL) in the Supreme Court (SC) for rehabilitation of fire-affected families in 1997. The apex court asked for a master plan, but the Bihar government (the area was in Bihar then) dragged its feet. In 2006, the SC asked for an update. Finally, in 2009, the government-approved Jharia Action Plan came into being.

Moving In Circles
The plan's focus was primarily on rehabilitation. But trapped in a web of human and economic interests, its dynamics are complex. Simply put, to stop the fires, the people need to be moved; to save the people, the fires need to be stopped. Where the fire is classified as unstable and uncontrollable, people have to be evacuated. For unstable but controllable fires, stowing has to be done (mines are filled with sand or mud, which cuts off the air supply and isolates the fire). But here, too, accusations of corruption crop up. Some say inadequate sand is being used and that corrupt officials are pocketing the profits.

As per the action plan, work is spread over a 12-year period; it is in the third year now. BCCL needs to shift 25,000 people, all employees. It says it has already moved 15,000, and the rest will be moved as soon as accommodation is built. But the huge responsibility of shifting 54,000 people lies with the Jharia Rehabilitation & Development Authority (JRDA). It has surveyed 312 sites in the past three years and still needs to complete the demographic survey for 283 remaining sites marked for rehabilitation. Easier said than done. "People are not participating in surveys for fear of being moved... Political parties isme rotiyan saink rahi hain (political parties are playing this to their benefit)," says Gopalji, in charge of resettlement and rehabilitation at JRDA.

break-page-break
Residents — both landowners and encroachers — somehow eke out a living. They feel they will not be able to work at the new locations. The master plan does not provide for alternate employment for the displaced. All they will get is minimum wage for 500 days and about Rs 10,000 in cash while moving. To that extent, their fears seem justified.

As of now, the only rehabilitation colony is Belgharia, 10 km from Jharia. Originally built by BCCL as a pilot project, it was handed over to JRDA. Pamphlets advertising the place call it the "City of Hope". In reality, it is a bumpy, hour-long drive from the closest hub of activity. Belgharia is home to 1,093 people from places such as Bokapahari, LUJ pit and Kedua. They are the ones who chose to move; many didn't. The residents seem more than happy to show you around. Bhawra, a young boy in his early 20s, shows us around his house — an 18 sq. metre area divided into a bedroom, a kitchen and a bathroom. There is a small television on. Right across are two pictures of Shahid Kapoor and Hrithik Roshan. Within a few minutes, the power goes. Water, he says, comes once every five days. Each family has a 5,000-litre water tank. His father says they moved because the authorities asked them to, and because the fires had made life difficult.

Fitting The Pieces Together
Belgharia may be a safe distance from the fires, and the pollution, but it is also far from work. The residents have to travel 10 km every day to their old village so that they can load trucks with coal. Every morning, a crammed bus takes them there. They have not even received the minimum wages due. Alcohol consumption is high and "there were mishaps because of that", says Gopalji. The money would now be disbursed to them in four instalments.

This, however, does not take away the flaws in the action plan. An 18-sq. metre home for a family of five is grossly inadequate. After many objections, JRDA gave two flats to each family instead. A revised plan for 25 sq. metre flats is in the works. The final tender for price is awaited. Those who stayed back in the deadly towns didn't have much choice. It was desperation. Wouldn't a need-based rehabilitation plan been more successful?

Even if people, like those who have stayed back in Lodhna, agree to move, there is still a hitch — land acquisition. BCCL says it granted JRDA 850 acres of its own land. "The government has given them a no-objection certificate but the responsibility for occupying it is theirs," says BCCL's Lahiri. He gives the example of Buli township — a 6,000-house colony allotted to non-BCCL people. "We have told JRDA to use that colony. We would remove 2,000 of our own people living there. And there is land available nearby that JRDA could acquire." But he concedes that political issues are at play.

Moreover, NOCs do not necessarily translate into physical possession of land. People in Buli do not want BCCL or anyone else on their land. "The land was acquired from them 20-25 years back for a purpose. That purpose was not achieved so they want their land back. There are provisions that if land is not used for the said purpose within five years, it must be returned," explains Gopalji. A colleague chips in: "They are not happy with the price the government is paying them for land either."

As far as budgets go, Rs 7,112.11 crore has been allocated (to BCCL and JRDA) for rehabilitation, fire-fighting and diversion of rail or road pipelines. But Lahiri believes Rs 2,300 crore meant for fire-fighting projects may go untouched since BCCL is generating revenue from the sale of mined coal. Regardless, the Rs 7,000-plus crore is too small a sum for such a mammoth task.

If the authorities are to be believed, apart from digging out, there is no other way of controlling the fires. A coal ministry official, however, assures that money is not an issue. "We will revise the budget to whatever is required," he says.

While the back and forth continues, the coal that India's steel industry needs desperately continues to turn into ash. And as the fires rage, the residents of the towns of Dhanbad and Jharia — surrounded on all sides by miles of dusty collieries — sleep uneasy.