It Is Too Early To Say Cheers 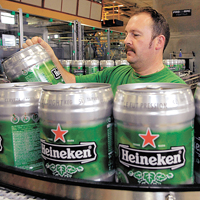 There is more than what meets the eyes in the settlement reached between Bangalore-based United Breweries (UB) and the Netherlands' Heineken. On 7 December, the two liquor behemoths announced that they have resolved the dispute over Singapore-based Asia Pacific Breweries (India) or APB. The Dutch firm will acquire APB, in which it already has 42.5 per cent stake, and merge it with UB in 2010. This was expected to ensure a smooth ride for Heineken. But things are not final yet.

"We have only reached a settlement with Heineken about their entry to India," says Ravi Nedungadi, chief financial officer and group president of UB. "We will meet the top management of Heineken in Singapore next week and talk about the nuances of a corporate tie-up."

UB owner Vijay Mallya is known to call the shots in business. So, there may not be a dramatic change that will deprive the Indian liquor baron of management control.

This opens up a lot of speculation about the Singapore meeting. Analysts say UBL will press Heineken for access to Tiger and Arlem, which sell two million cases in India. UB will also want its flagship brand Kingfisher beer to be sold through European retail chains. Kingfisher is now sold through agents in the UK and US and has only been able to reach Indian restaurants as an ethnic beer. "We will still want to position our beer as an ethnic beer, but we will want to access retail chains. There won't be any conflict with Heineken because their positioning is different," says Nedungadi.