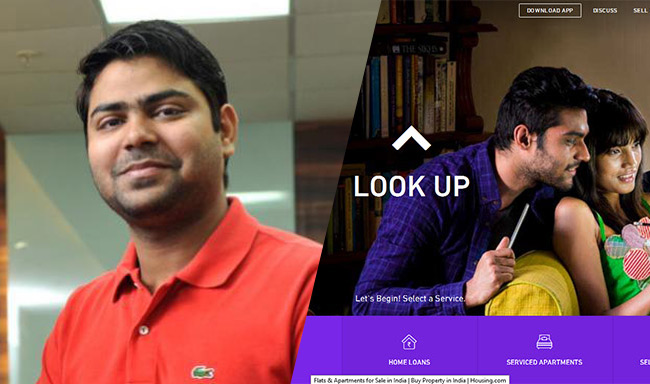 08 September, 2015
Print this article Font size -16+
Can any news about Housing.com be without any reference to Rahul Yadav? It is rumoured that a number of people are “voluntarily quitting” Housing.com and joining the ex-CEO, Rahul Yadav, in his new start-up.
This comes on top of reports about Housing’s plan to lay off around 600 employees from the company. The three-year-old start-up plans to shut down non-core areas like commercial properties, short stays and land businesses. A few of the people working in these verticals have been asked to either move to the digital or tech teams, or quit. It will also cease operations in smaller cities and streamline its focus on revenue-generation and building an advertisement business in large cities and towns.
Rahul Yadav has reportedly managed to get a huge round of funding from some of the top entrepreneurs including Flipkart’s Sachin & Binny Bansal; Paytm’s Vijay Shekhar Sharma and few others. Some time back, he had twitted that he is going to launch his company very soon.
Inc42 has reported that Housing.com’ Chief Marketing Officer, Pratik Seal; Azeem Zainulbhai, chief of staff at Housing, who was taking care of the finance function at Housing and Suvonil Chatterjee, Chief Design Officer at Housing have left the company. Azeem and Suvonil have joined Rahul’s startup as co-founders. About 6-7 other senior level people have also left to join him.
However, the Housing.com management claimed the team that will drive the company forward is intact.  "The Housing senior management team that will be driving the company going forward is not only very much intact but will be expanding significantly soon, as the company enters a new dynamic phase of driving efficiencies and growth," said CEO & COO Rishabh Gupta and CBO Jason Kothari.
Housing.com staff strength has fallen to 2,200 from 2,850 employees at the time when Rahul Yadav was the CEO. Sources say the product design team, offline marketing team & the design team assisting marketing team has been cut down.
There were rumors suggesting that the new Startup by Rahul Yadav might be similar to Housing.com, however, it’s still not confirmed.
The current financial condition of Housing is a reason why employees may be leaving with many doubting how long the company will be able to survive with the drying up warchest. The company was reportedly in talks with the Chinese real estate portal, SouFun, for either a strategic investment or a buyout. However, sources say Softbank might decide to chip in a bridge round.
Meanwhile, Housing.com has acquired Bengaluru-based HomeBuy360, a customer relationship management software company, for $2 million or Rs 13 crore last month.
However, according to a few sources, Softbank might decide to chip in a bridge round, but on the same or little more valuation as since the last round as there has been no growth in Housing’s business.
Tags assigned to this article:
housing rahul yadav