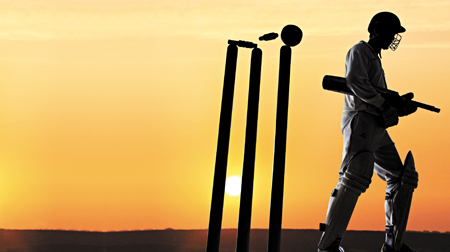 
Industry watchers accuse the BCCI of overplaying the game and creating audience fatigue. "The past year saw 319 days of international cricket. Even for the Indian Premier League's (IPL) fourth season, TVRs (television viewer ratings) were down 29 per cent from a year ago," says Thawani. Some of his peers agree with this and see Thawani as a victim of the eroding value of cricket and falling advertising rates. Media planners such as Shashi Sinha, CEO of Lodestar Universal, however, attribute falling advertising rates to recessionary conditions. He admits airtime rates for Test cricket and one-day internationals (ODIs) have fallen, but insists the IPL is still on a roll. "There is still a scramble among advertisers to find a place in the coming season. Rates are inching up," says Sinha. So where is the cricket mania taking us?

The Nimbus Googly
The immediate trigger for the BCCI to axe Nimbus was the firm's failure to heed calls for payment. The total value of the rights for 2010-14 was pegged at Rs 2,000 crore. The agreed formula was that Rs 31.25 crore per match would have to be paid before the start of each season or series. The breakdown happened during the recent West Indies tour. Nimbus was required to shell out Rs 137 crore, but it could cough up only Rs 50 crore.

It was not as if the BCCI had not faced payment defaults or delays for 2006-10. So what brought matters to a head? Industry sources say the wise men at the BCCI were irked with Thawani using their platform to launch his dream project, the World Series Hockey in the league format. It also appears a Delhi District Cricket Association (DDCA) member is on the board of Hockey India, too. The body saw Nimbus's attempt to set up a hockey league as a move hostile to the official agenda of Hockey India — like the imbroglio that pitted the Chandra-promoted Indian Cricket League against IPL.

Expectedly, Nimbus blames the BCCI. Nimbus sources say a "BJP lobby" in the board is ganging up to scuttle the India-Pakistan series earlier scheduled for February. While the Pakistan Cricket Board (PCB) has been keen to put the series back on course, "the BCCI has not even been responding to requests for meetings with the PCB." Calling the series "the jewel in the crown", a Nimbus executive says while a normal series in India yields Rs 150 crore in revenues, an Indo-Pakistan series can generate Rs 400-450 crore. "Nimbus had forecast an annual turnover of Rs 1,050, but with the series scuttled, it is down to Rs 700 crore now," says the executive.

break-page-break
Nimbus also alleges that the BCCI refused to field the best team for the November West Indies series, which was damaging for it in terms of poor audience interest. Several top players, including Sachin Tendulkar and M.S. Dhoni, did not play. But a BCCI lawyer told BW that the board is within its contractual rights to field the team it thinks is the best.

Interestingly, the first round of the battle had gone Nimbus' way with the Bombay High Court and banks refusing to allow the BCCI to cash Nimbus' bank guarantees of Rs 1,600 crore. The banks —Punjab National Bank, Bank of India and Union Bank — felt that once the telecast rights were terminated, the guarantee could not be invoked. They also say the claim on Nimbus is of just Rs 87 crore for which a bank guarantee for Rs 1,600 crore is not tenable. But the banks have said they will not return the margin money, 10 per cent of the guarantee, to Nimbus.

While the high court has hinted that it will take a final view on 7 February, the main dispute has gone to arbitration. Nimbus is still not sure whether it will root for reinstatement of rights or settle for compensation. Industry sources feel Nimbus may prefer a monetary settlement, setting the stage for another round of auctions and valuations.

5,410 Per Cent Growth
When once asked if he had over-valued the rights he bought, Thawani was circumspect. He conceded the 2006-10 rights (Rs 2,755 crore) were "over-valued", but said the 2010-14 valuation at Rs 2,000 crore was "fair". A major bone of contention during 2006-10 was the launch of IPL. Nimbus said its rights for 25 Tests and 55 ODIs were eroded by the BCCI launching the peppier T-20 format with Sony as the telecast partner. Sharad Pawar, president of the BCCI, felt Nimbus had a point and agreed to give it a rebate of about 11 per cent on the contracted amount.

Media planners say the Rs 31.25 crore-per-match fee contracted for 2010-14 is also not recoverable. The collection window for four years is 160 days in India. This includes more than 60 games averaging to a three-month cricket season per year. With a 25-30 per cent fall in airtime rates, ODI ad rates have settled at about Rs 2 lakh per 10 seconds. This translates to Rs 10 crore in ad revenues per match. With an approximate income of Rs 10-12 crore from subscriptions, Internet and ground rights, there will still be an uncovered Rs 10-12 crore per match. And the deficit will grow with every match.

"There is an oversupply of cricket. India is playing 219 days a year now. And, over the years, competition for eyeballs has increased. Cricket now has to compete with over 20 film channels and phenomenon like Anna Hazare. The advertiser and the consumer are kings now, but the broadcaster continues to lose money," says Himanshu Mody, Essel Group's head of finance and strategy. Mody has been closely associated with the group's cricket bids and acquisition of Ten Sports. "For an India-England match on a Sunday at Mumbai's Wankhede Stadium, the stands were empty. This was unheard of five years ago," he says.

Neo Sports is not the only star-crossed broadcaster. ESPN Star Sports is also in trouble after coughing up $1.03 billion for 10-year telecast rights for International Council for Cricket's T-20 Champions Trophy. The payments plan includes $350 million in the first five years and $650 million over the next five. But during the three seasons of Champions Trophy so far, ESS has averaged just about $20 million in ad revenues per season. Even for the ODI World Cup held during February-April, which had everything going for the broadcaster with India winning and dozens of nail-biting encounters, ESS struggled to break even. Media pundits estimate ESS made a handsome Rs600 crore from airtime sales, Rs 50 crore from international syndication and another Rs 200 crore from subscriptions. But this too seems to have fallen short due to the high cost of rights. Against a total income of $200 million, rights, production costs, and so on make up an estimated $250-270 million.

"No one can make money from the BCCI," comments a sports rights consultant. From 1999, when Prasar Bharti held the rights (Rs 50 crore) till 2006, when they were valued at Rs2,755 crore, the cost of the telecast rights have gone up by a humungous 5,410 per cent.

Cricket's Resilience
The key to cricket's future lies in whether audiences and advertisers will continue to support the game. Though there has been a steady fall in ad rates for Test cricket and some erosion for ODIs, IPL's airtime rates have been rising. "Over the past five years, airtime rates have fallen from Rs 60,000 to about Rs40,000 for 10 seconds. Rates for ODIs have been flat or have marginally declined, to about Rs 3 lakh. But the rates for IPL is up 10-15 per cent and is now close to Rs 5 lakh for 10 seconds," says Nikhil Rangnekar, CEO of media audit firm Spatial Access.

break-page-break
Agrees Lodestar's Sinha: "There is still a scramble among traditional advertisers such as two-wheeler makers and telcom companies to get in as title sponsors. IPL 4 will generate Rs 800-1,000 crore this year, too." The rates may soften up to 20 per cent later this year with the Indian team performing poorly and there being too much of the game. Sinha, however, cites economic factors and says cricket has not been delivering less than before.

But audience numbers have clearly declined. Rangnekar says big-ticket ODIs in 2005 delivered TVRs of 6-7, against the current 3-4. Data from audience tracker TAM Media show that even for the IPL, the average TVR for season 4 (2011) fell to 3.91 from 5.51 in season 3. Cricket is probably the riskiest of advertising platforms due to multiple variables: whether India wins, whether matches are on holidays, how close a game is and so on. For instance, the highly-touted World Cup 2007 was a washout for SET Max channel, delivering an average TVR of just 2.02, after India was ousted in the qualifying rounds. That said, the game has always surprised doomsayers. For example, Test cricket, which everyone thought was dead, has been attracting TVRs of 1.0 and above.

L.V. Krishnan, CEO of television audience research firm TAM Media, rightly insists on a long-term view of the game to understand its economics. "Cricket audiences have nearly doubled since the 2003 World Cup; from 85 million to 150 million in 2011. Advertising revenues have performed even better, from Rs 300-400 crore in 2003 to about Rs 2,000 crore in 2011." He says the T20 format has added to the game, with ad revenues from IPL accounting for as much as 15 per cent of the pie. "The short format has brought in young audience and encouraged family viewing. It has a great following."

According to Rangnekar, cricket is here to stay. It delivers better than other platforms, both for advertisers and media planners. "For advertisers such as telcos — who need year-round reach — and mass, male-oriented brands, the cricket platform is crucial. For those launching a campaign, IPL provides mammoth audience for 45 days." However, for FMCG brands that can ride a more flexible media plan, investing in IPL can be a waste, Rangnekar says. "Hindi general entertainment channels can deliver the same impact at a cost-per-rating point of Rs 15,000, against IPL's back-breaking Rs 90,000."

But for broadcasters, things are not rosy at all. With the BCCI driving up rates and broadcasters overbidding, cricket properties have become unaffordable. Sometime soon, the BCCI, too, will have to trim its greed and not milk its bountiful cow to the last drop.

For instance, when the BCCI auctioned the telecast rights in August 2004, there was shock and awe when Zee pulled ahead of market leader ESPN with a bid of $260 million against ESS' $230 million. But the then BCCI president Jagmohan Dalmiya rejected Zee's bid on the grounds of lack of "experience" and the contest went into a second round. Telecast rights were now offered for five years instead of four earlier. ESPN upped its bid from $230 million earlier to $280 million. But Zee, not to be outdone, bettered it with $308 million. ESPN moved court and the BCCI played ball and cancelled the entire process. Ultimately, greed won. By October, BCCI was forced to give away the rights virtually free for the next two years to Doordarshan, for a paltry Rs 3 crore per day for Test matches and Rs 7 crore per ODI.

So, what is the way forward? Less international cricket, and more local encounters. Says Essel Group's Mody: "Ultimately, we have to go the way of football. We must collapse boring cricket between country teams. Instead, we need more club cricket such as the IPL and big-ticket, signature International World Cup tournaments." Neither is cricket getting less popular, nor are the crowds going anywhere. As Kunal Dasgupta, the visionary former CEO of Sony Entertainment Television once put it: "India has to win just one game after a string of defeats, and the eyeballs are back." That's cricket.