Is A Bharat Not Quite Nirbhar On China Really A Pipedream?

India has taken firm steps to reduce dependence on imports and investments from China, but hard numbers show up many hurdles 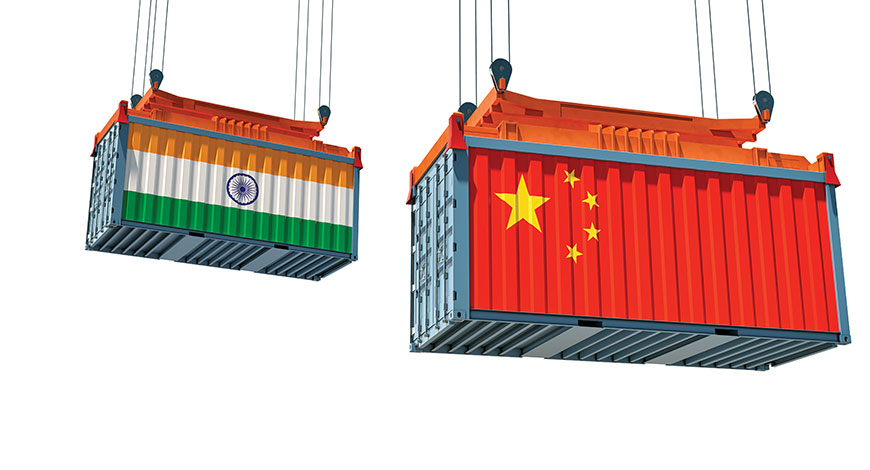 Mid-June 2020, the Department of Telecom (DoT) of the Union Ministry of Communications, asked two state-run telecom companies – BSNL and MTNL – to refrain from using Chinese equipment in their 4G expansion. The DoT advised private telecom operators to do the same.

Later in the month, the Maharashtra chief minister paused three Chinese projects worth Rs 5,000 crore (including Great Wall Motors). Soon after, Uttar Pradesh and Haryana made  conditions for imports from China more stringent too.

At around the same time, a union of MSMEs (micro, small and medium enterprises) in Noida, comprising 20,000 MSME units, decided to boycott Chinese products and equipment in their manufacturing processes. In early July, Union Minister Nitin Gadkari announced a ban on Chinese companies. (both independent and joint ventures) participating in highway projects. He said Chinese investors would be discouraged in MSMEs too. A more direct consumer facing development came in July, when the government banned 59 Chinese mobile applications, including social media platforms, such as TikTok, WeChat and Helo, citing the “country’s sovereignty and integrity, and security of the state”. Soon after Union Power Minister, R. K. Singh, declared that India would not import power equipment from China.

Action began at the company level too around this time, when companies like the JSW Group voiced decisions to boycott China. The group said it would stop importing $400 million worth of goods from China over the next two years. Earlier the Indian government had made changes to its foreign direct investment (FDI) policy mandating government clearance of all FDI inflows from countries that share land borders with India, which of course, pertain to investments from China too.

The government, companies, consumers – have all taken a firm stance against China. While the immediate trigger was the clash between the troops of the two neighbours at the border in Ladakh, the decisions also come when India is firing on all cylinders  in its bid to achieve ‘atmanirbharta’ or self-reliance.

Boycott of Chinese goods is no longer limited to rhetoric and firm measures have been taken by the government to reduce dependence on imports from China. For instance, India has commissioned four new urea plants that should go on stream before 2021, which is a step toward self-reliance. All of this, however, is only half the story. The other half of the story is the very crux of the problem itself – India’s deep dependence on China. A Relationship Too Deep
Earlier in the year, when the coronavirus had just reared its head and China was the place of origin, the TVS Group, Hero MotoCorp, Mahindra & Mahindra, Maruti Suzuki, had all indicated disrupted manufacturing and production, owing to supply glitches from China.

India is a large importer of components from China. In 2018-19 imports from China made up 27 per cent or $4.75 billion out of the total $17.6 billion imports into India, according to the Automotive Component Manufacturers Association (ACMA), the apex body of auto parts manufacturers.   India imports drive transmission parts, electronic and electrical items, cooling systems, suspension, braking and steering parts from China.

India depends heavily on China for batteries and battery cells used for building electric vehicles. At present, no company in India makes these components locally while China has a near monopoly in battery cell production in the world. Not just the auto sector but pharmaceuticals, consumer durables, telecom, power, luggage and several other industries are in a similar predicament.

Chinese investments into the Indian economy amount to nearly $8 billion in myriad sectors including Indian startups, tech companies, smartphones and applications (apps).  At least 18 of 23 Indian startups, including Paytm, Snapdeal, Ola, Swiggy, Zomato and BigBasket are backed by Chinese investors such as Alibaba, Tencent and Ant Financial. According to data and analytics firm GlobalData, Chinese investments in Indian startups have grown 12 times over the past four years to $4.6 billion in 2019 from $381 million in 2016 with a majority of unicorns in India being backed by corporates and pure-play investment firms from China. Industry pundits claim that in the short-term, India’s decision may affect liquidity in Indian firms, especially home-grown unicorns and startups.   “The economic consequences of these moves are likely to be decent initially. However, a bigger impact would come if India decides to completely break away from China and seriously try and secure stronger strategic ties with the United States, Japan, Australia, France, UK and other such countries,” says Kausshal Dugarr, Founder and CEO, Teabox, India’s luxury premium tea brand.

Investors Unfazed
While the situation is marred  by several uncertainties, most Chinese players maintain that this is a temporary phase and that it will not impact Chinese brands in India. Chinese smartphones like Oppo, Vivo, Realme and Xiaomi command a lion’s share of the Indian market at 72 per cent, outselling Nokia, Samsung, Motorola and Apple.

Over the last few years, a handful of Chinese auto giants like MG, Great Wall Motors, Haima, etc. have also forayed into India. Retailers opine though, that the growing anti-China  rhetoric is unlikely to sway consumer behaviour, because of the perceived  ‘value for money’ in Chinese products, especially smartphones.

Xiaomi, the smartphone market leader in India, has seven factories in the country. It was planning to invest more than $500 million to expand its retail presence in India. Other manufacturers such as Oppo, Vivo and OnePlus also run self-owned manufacturing facilities in India.

“The fact that we have been able to grow from a non-existent brand nearly five- and- a- half years
ago to a brand that leads in the smartphone category in the offline space and is number two in the overall market, reflects the strong love and support of customers, retailers and business partners,” points out Nipun Marya, Director, Brand Strategy, Vivo India.

Marya expects this sentiment to continue. “People within the Vivo ecosystem, whether they are retailers or partners, know the kind of investments done in establishing our made in India commitment. Through our make-in-India initiative, 100 per cent of what we sell in India, is made in India. We have already earmarked Rs 7,500 crore investment towards Make in India with respect to manufacturing. This will in turn generate employment opportunities for 10,000 directly and 30,000 people indirectly,” he goes on to say.

Teething Troubles
While Chinese players are unfazed, some industries are facing the brunt of the ban on imports. The immediate impact of the anti-China trade policy could affect the supply chain of Indian manufacturers. Auto and smartphone industries are, for instance,  dealing with heavy surveillance of Chinese parts at the various ports in the country. Many consumer electronics makers have said that production would be “paralysed” if they were unable to import crucial intermediate goods from China.

“We are not worried about finished goods. But most players across the globe import key components such as compressors from China. It would take a long time to set up local supply chains, and there are few alternatives for certain kinds of imports,” says B. Thiagarajan, Managing Director of Blue Star.

Rajan Wadhera, President, SIAM, too corroborates the fact that import consignments being subject to manual inspection, was resulting in inordinate delays in clearance at the ports. “Inordinate delays in clearance due to congestions at ports could eventually impact manufacturing of vehicles in India. The industry is piecing itself together as growth is limping back. Any further disruption at this juncture is best avoided,” says he.

Atmanirbhar Bharat
Chinese stainless-steel companies have set up large production capacities in Indonesia and have been shipping products in large quantities into India. “Unwarranted imports of stainless steel products from Indonesia have distorted the stainless steel markets, not just in India but around the world. During the countervailing duty (CVD) investigations carried out by the Government of India, it was proven that Chinese mills producing stainless steel flat products enjoy subsidised logistics and resources,” points out K.K. Pahuja, President, ISSDA.

“Atmanirbharata has been at the heart of our core strategy since 2014-15. The result is that CBU (completely built up) imports from 78 per cent of domestic demand in 2014-15 have come down to three per cent. We need to be the factory of the world. This process will be a phased and calibrated one, wherein we can develop deep competencies, which see us through for the next two-three decades. There is no place for any knee-jerk or disrupted action in this project,” says Pankaj Mohindroo, Chairman, India Cellular & Electronics Association (ICEA).

Factory of the world
Could India truly be the factory of the world, by decreasing it’s dependence on China? Yes, indeed, it is possible if there is an enabling ecosystem, chorus most industry leaders. “We have always been keen to ramp up our manufacturing footprint in India. But we all know that is not easy. You cannot just unplug factories in other countries and bring them to India. The infrastructure, incentives, commercials, etc. must make sense,” points out. Rahul Agarwal, Managing Director, Lenovo India.

“We have been requesting the government to give us some incentives (for laptops, desktops, etc). The government has done that in the mobile industry by coming up with a Production Linked Incentive (PLI) scheme and if they can extend that to computers, we can enhance our manufacturing and R&D activities in India,” says Agarwal.

“The dependence of the domestic economy on Chinese imports remains high with direct contribution to over 30 per cent of India’s aggregate trade deficit. Over the past three decades, India’s exports to China grew at a CAGR of 30 per cent but its imports expanded at 47 per cent, leading to lower capacity utilisation of domestic players in a few sectors,” explains Suman Chowdhury, Chief Analytical Officer, Acuité Ratings & Research.

Reality Check
Even though there is intense clampdown on Chinese products and investments in the country, the impact may not be that earth shattering as China accounts for 0.5 per cent of FDIs into India. China is India’s largest trading partner, with trade being skewed in China’s favour. Out of the $2.5 trillion overall Chinese exports in 2018, India accounted for around $70 billion, which is roughly three per cent of the total exports.

“We are ready to put everything here, but the key point is to have chipset manufacturing companies like Intel or AMD to set up their fabrication plants here in India. We have been saying we are ready to look at whatever is available in the country and we are ready to buy it from here. Not only source components from here and Make in India, we are also ready to export,” says Acer India MD Harish Kohli. “Acer India has been exporting desktops to Vietnam, Indonesia, Thailand, Philippines from our factory in Pondicherry,” says Kohli speaking to BW Businessworld.

At present, India imports almost 50 per cent of its electronic goods and 75 per cent of raw material for lucrative generic medicine. China is not dependent on India to the same extent for raw materials or intermediaries. India imports mainly toys, lightings, electronic products, parts of computers, cars and motorcycles, milk products, fertilisers, antibiotics and mobiles, among other things.

Rooting for a non-China nirbhar  (reliant) India, has a ring of nationalism around it, but it is not a mission that will prove easy to achieve. India’s move toward self-reliance and toward leveraging an opportunity when companies globally are looking at alternatives to China, will only truly play out if the Indian government pushes more to create an enabling ecosystem and ease of doing business in India. The road ahead is clear, but still way too long.