Irregularities In Implementation Of MNREGA: CAG 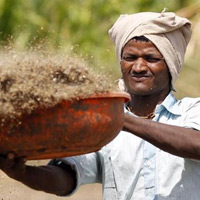 08 November, 2014
Print this article Font size -16+
Coming down heavily on the way MNREGA has been implemented, government auditor CAG on Tuesday said "irregularities" were detected and works of over Rs 4000 crore were lying incomplete while projects undertaken for over Rs.2000 crore under the rural job scheme were not permissible.

The irregularities in Mahatma Gandhi National Rural Employment Guarantee Act (MNREGA) pertain to diversion of funds, implementation of impermissible works and deficiencies in maintenance of records, said the report of the Comptroller and Auditor General (CAG) which was tabled in Parliament on Tuesday.

The auditor made a strong pitch for centralised monitoring of the rural job scheme, flagged by the United Progressive Alliance (UPA) as one of its biggest achievements to benefit the poor.

"Irregularities were...noticed in the works undertaken under MNREGA. Instances of works abandoned midway or not completed for a significant period were noticed.

incomplete even after one to 5 years. It was also noted that expenditure on works amounting Rs 6,547.35 crore did not result in creation of durable assets. Cases of diversion

of funds for other uses were also seen in large number of states", the report said.

The CAG said that states with large population of poor people like Bihar, Maharashtra and Uttar Pradesh were not taking advantage of the scheme to ameliorate the condition of poor.

"...three states-Bihar, Maharashtra and Uttar Pradesh had 46 per cent of the rural poor in India, but accounted for only about 20 per cent of the total funds released under the

scheme. This would indicate that the poorest of the poor were not fully able to exercise their rights under the MNREGA," it said.

Commenting on the CAG, Rural Development Minister Jairam Ramesh said that "it is a performance audit, it is not a financial audit, it not forensic audit...In the past 30 years,

I have never seen the CAG give a positive observation."  The Minister, however, admitted that there was problem in implementation of the scheme in states like Bihar and Uttar Pradesh. .

The CAG said it suspects financial irregularities in the procedures for payment of wages or material. "In eight states, there were cases of suspected misappropriation of funds of Rs. 128.23 crore as no supporting vouchers relating to payments were available on record," it said.

Similarly, tampering with muster rolls was noticed in 10 states. Wages of Rs 3.84 crore were paid on suspected muster rolls. Engagement of same workers under different

muster rolls at different locations for the same period was also observed.

Audit analysis of data related to the performance of the scheme showed significant decline in per rural household employment generation in the last two years. "The per rural household employment declined from 54 days in 2009-10 to 43 days in 2011-12," the CAG said. "There was also a substantial decline in the proportion of works completed in 2011-12," it said citing poor implementation of the programme in Bihar, Maharashtra and Uttar Pradesh. "This indicated that the correlation between poverty levels and implementation of MGNREGA was not very high."

The CAG said that monitoring of implementation of the scheme at the Central level was unsatisfactory.

"The Central Council could not fulfil its statutory mandate of establishing a central evaluation and monitoring system even after six years of its existence," the report said,

adding the only monitoring activity carried out was in the form of 13 ad-hoc field visits to six states by the Council members. "No follow up action was taken on these visits by the Council. There was shortfall between 82 and 100 per cent in inspection of works in 11 states," it said.

gram panchayats, in various types of records. "Widespread deficiencies in the maintenance of records restricted the process of proper verification of the outputs and outcomes of the scheme," the report said.