Into An Air Pocket 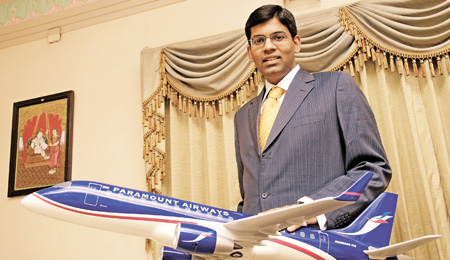 08 November, 2014
Print this article Font size -16+
It has been a turbulent week for Paramount Airways, the Chennai-based full business class airline. Three of its aircraft were grounded for five days by the Directorate General of Civil Aviation (DGCA) after a lease payment dispute. Then, following a Delhi High Court order in its favour, the airline was scrambling to get its planes back in the air.

But behind the scenes, the airline — which has said it was profitable even when other airline companies were flying in the red — has been facing other problems too. The income tax (I-T) department is taking action against Paramount Airways as it has not filed TDS returns from the financial year 2007-08 onwards.

"The above company is yet to file their e-TDS returns for the FY 2007-08 to the current financial year," the I-T department stated in reply to a petition filed under the Right To Information Act by BW. "Appropriate action has already been initiated against them for obtaining their e-TDS returns and in regard to the balance of taxes to be remitted to the government's a/c for each of the financial years involved along with penal interest," the department stated in a letter signed by V. Ramakrishnan, income tax officer, TDS Ward, Madurai.

The IT department's letter comes after complaints by former employees that they did not receive their Form 16 (which gives the amount of income tax deducted from personnel and paid to the government) from Paramount even though income tax had been deducted at source.

One former employee wrote in a letter to the IT department: "They (Paramount) have deducted my tax at source from my salary every month for the financial year 2007-08 and 2008-09 but have not deposited (it) with the authorities. Form 16 for these two financial years have not been issued." When queried, C.R. Kannan, vice-president, Paramount Airways, denied that the company was facing action by the IT department.

The aviation industry has been flying through rough weather in the past one year with revenues tumbling. But Paramount Airways, which flies the Brazilian-made Embraer aircraft, has said that despite the headwinds, it has been able to avoid the worst of the problems afflicting the sector and that it has passenger load factors of almost 80 per cent (which means that its planes are 80 per cent full).

Nevertheless, it has faced problems with the two companies from which its planes are leased. Gecas (GE Commercial Aviation Services) demanded last month that the three Embraer planes leased by it to Paramount should be returned over a payment dispute. It wrote to the DGCA demanding that the planes be de-registered. Accordingly, the DGCA de-registered the planes on 4 December. Gecas refused to comment on Paramount saying: "Our customer discussions are confidential and, therefore, we are unable to comment on this subject." The de-registration has since been stayed by the Delhi High Court.

In another payment dispute, Paramount also faced legal action in September by ECC Leasing (an Embraer subsidiary) from which it has leased two planes. ECC Leasing too had demanded its planes back because it said it hadn't received its monthly lease payments. Paramount was given time by a judge of the Madras High Court to make the payments and it deposited money in the court.

The airline, in addition, is under close watch by the DGCA. At a meeting on 27 October with the DGCA, the agency's chairman S.N.A. Zaidi "expressed concern over a number of outstanding regulatory issues of Paramount Airways", according to minutes of the discussion. Zaidi also stated "there is a lack of response from Paramount Airways in addressing various safety issues like investigation of incidents, maintenance related issues, etc."
Asked about the meeting with DGCA, Paramount's Kannan said that it was part of regular interactions with the aviation authority and said there were no serious problems.

Another point brought up at the meeting was that the airline has not had a vice-president, engineering, for almost a year — a post that's considered important for air safety by the DGCA. At the meeting, top Paramount executives (including managing director M. Thiagarajan) had promised that the post would be filled by 1 December. The post had not been filled at the time of writing.

In fact, the DGCA sent a reminder to the airline on 7 December that it had not received an action taken report about the subjects raised at the October meeting. Another point raised at the 27 October meeting was that the airline had started flying to new routes without preparing standard operating procedures (SOPs) for those routes. To this point, the airline promised that it would not start flying to any new route without having SOPs "approved by the DGCA".

Paramount's Kannan also said that all flights were being resumed and that four aeroplanes started flying again this week. In fact, the executive said that the airline would be flying 70 flights daily. On Wednesday, the airline flew three planes and 33 flights. That was expected to rise to 39 when the fourth aircraft started flying.

But maintaining full schedules could be a challenge because Paramount has been losing captains to fly its aircraft. Five expatriate captains have left the country in recent weeks. Besides that, four other captains are awaiting regulatory clearances from the DGCA or cannot fly because they have exceeded the number of hours permissible or are awaiting visa clearance, according to an internal company document. As a result, Paramount has only 15 command pilots or captains, though it needs around 30 to operate comfortably, the document says.

"With the current FDTL (flight duty time limitation) fully in force with no deviations (30 hours per seven consecutive days), we cannot incur any violations whatsoever. From now on, the pilots will watch very carefully their FDTL, and step down when the time limit is reached," the memo states. The internal memo adds that the company is under "microscopic" scrutiny by DGCA.

The airline has also suffered a loss of senior executive personnel. Several top officials of the airline have quit the carrier since the beginning of the year including one head of operations, the finance chief, the head of human relations and the head of the engineering department.

Down, But Not Out
Paramount, which started flying in 2005, operates five planes, the minimum needed to retain its licence as a scheduled carrier. Kannan says currently, one aeroplane is not in service because it has gone for a scheduled maintenance check.

The company has announced ambitious growth plans and there were rumours a few months ago that it was planning to buy Mumbai-based Go Air. This was subsequently denied by Go Air. Earlier this year, Thiagarajan told journalists the airline planned to have flights all over India by 2010, and it would be flying on international routes by 2011 to destinations in the Gulf, South East Asia and Europe. He said the airline aimed to have a fleet of over 25 aircraft by that time. Currently, it has two Embraer E170s and three Embraer 175s, all on lease.

Also, Thiagarajan said in April the airline would be adding to its fleet during the year. He said the airline would continue to be an all business class airline even on foreign routes and would have wide-bodied aircraft configured to its business-class formula. Leading newspapers had reported that Paramount would spend close to $1 billion on its expansion.

Thiagarajan's family owns the Paramount Textiles Group based in Madurai. The young entrepreneur — he's in his early 30s — also spends a large part of his time in the south Indian temple city which is where the airline's registered office is located.

The airline does have certain advantages that have enabled it to keep costs low. For starters, its Embraer 170s and 175s which carry 70 and 75 passengers respectively, are extremely economical. Also, planes that carry fewer than 80 passengers pay lower taxes than larger aircraft and lower airport charges. The aircraft break even on extremely low load factors.

Despite these advantages, it has been a difficult period for Paramount and the airline looks like being forced to play its cards skilfully in the months ahead.