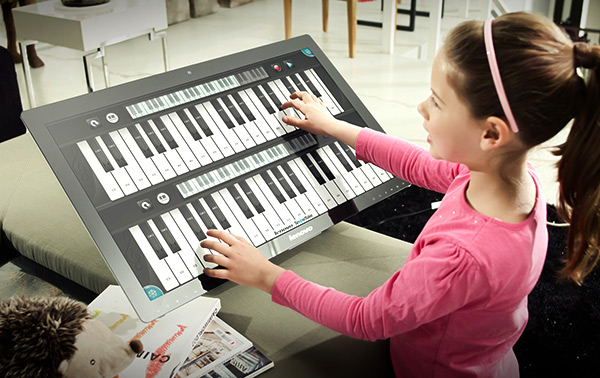 08 November, 2014
Print this article Font size -16+
Lenovo's been pulling some neat tricks out of their design hat of late, first with the 360-degree-swivelling Yoga and now with the IdeaCentre A720. Much like the Yoga, the A720 features a hinge with a touch of genius, but is this surprisingly flexible all-in-one worth the money? Read on…

Pulling this 11.6 kg all-in-one out of the box, the first think you notice is that it's got a surprisingly slim profile for a 27-inch all-in-one, and it looks more high-end monitor than a PC. You see, unlike many all-in-ones which place the hardware behind the display, the A720 instead puts all its major components inside the stand, which helps slim down the display immensely. Of course, what's really interesting is how Lenovo has approached a big issue with using massive touchscreen displays — arm fatigue, the fact that you just can't hold your arm perpendicular to a surface for extended durations. With the A720, the hidden hinges allow the display to recline all the way back to an impressive all-flat 90 degrees. This flexibility, coupled with the multi-touch display which recognises ten simultaneous finger inputs, means not only that using Windows 8 in the pushed back mode is easier, but it also allows for innovative applications such as an on-screen piano or a two-player touch games.

With such a massive display at its disposal, it's sensible that Lenovo's included an HDMI-input which lets you use the A720 as a standalone display which even works when the PC is turned off. However, the display by itself is a bit of a letdown — a full HD 1080p display is great at 15 or 18 inches, but at 27-inches, there just aren't enough pixels to make the screen look sharp. Competitors like Apple have figured this out and provide a resolution of 2560 x 1440 on their 27-inch models, and running with a full HD display is clearly a missed opportunity for Lenovo. The specs, both in terms of the stock processor and graphics card, are about average for high-end PCs. While they don't impact usability of the A720 on a daily basis and would easily be overlooked on cheaper systems, at this price, I expect more.