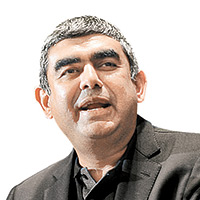 08 November, 2014
Print this article Font size -16+
Infosys finally went with ‘big money’ — Vishal Sikka. Ending all speculation about who will lead India’s second-biggest IT company, the former chief technology officer of SAP has been handpicked for the top job. He is the first person outside the group of founders to be appointed to the position in the company’s three-decade history. The 47-year-old will replace S.D. Shibulal from 1 August. His entry will also witness the exit of executive chairman N.R. Narayana Murthy and son Rohan, who will leave the company by October, almost four years ahead of the designated end of their term.

No More A Pal
PayPal president David Marcus, who was running a 14,000 person company with $6.6 billion in revenues, has quit to lead Facebook’s messaging products. Joining as vice-president of messaging products, he will be looking outside of ads for Messenger to bring in revenues. He joined PayPal in 2011 as vice-president when his company Zong, a mobile payments provider for gaming and social-networking companies, was acquired by eBay. In 2012, he was promoted to the position of president.

Settlement Pangs
BNP Paribas SA’s chief operating officer Georges Chodron de Courcel quit even as US authorities prepare to impose a fine of more than $10 billion on the French bank for evading US sanctions against countries such as Iran, Sudan and Cuba between 2002 and 2009 by carrying out dollar transactions with them. His departure is seen as one of the first big concessions that the bank has made in its negotiations with the US authorities. The 64-year-old, with the bank for 42 years, was also the chairman of BNP’s Swiss subsidiary.

Time For Extra Cover
American International Group (AIG) has named Peter D. Hancock, head of the insurance giant’s property casualty unit, as the new president and chief executive. Long rumoured to be in the running, he will take charge of the company on 1 September. He will also join AIG’s board. The 55-year-old, who joined the company from KeyCorp in 2010, will replace Robert Benmosche, whose resignation came earlier than expected.

Love Gone Sour
Bombay Dyeing scion Ness Wadia’s former girlfriend has lodged a case of molestation against him. Bollywood actress Preity Zinta, who is co-owner of the Kings XI Punjab IPL cricket team along with Wadia, has alleged that the 44-year-old industrialist molested, abused and threatened her in full public view during an IPL match at the Wankhede Stadium on 30 May. The Wadia group has attempted to counter the charges by alleging a threat from the underworld.

Change Of Guard
Weeks ahead of the Budget, Shaktikanta Das, a Tamil Nadu batch IAS officer, took charge as the new revenue secretary. He replaced Rajiv Takru, who has been moved to the Department of North Eastern Region (DONER). Das, who earlier held the post of secretary in the Department of Fertilisers in the Ministry of Chemical and Fertilisers,is also the man behind Tamil Nadu’s successful SEZ and industrial policy.

Nobel Move
Akzo Nobel appointed Maëlys Castella to succeed chief financial officer Keith Nichols, making her the first woman to hold the post at Europe’s largest paint maker. The 47-year-old will join the Amsterdam-based maker of Dulux paints on 15 September from industrial gas producer Air Liquide SA, where she has worked for 14 years and, most recently, was group deputy CFO. Castella will also be the second woman ever to serve on the executive committee of the firm.

In The Slammer
Rajat Gupta, former Goldman Sachs director, began his two-year jail term for insider trading after losing his latest appeal against the fines imposed and the ban on serving as a public company officer. Gupta, 65, will now have to pay $13.9 million as penalty, in addition to the $5 million fine in the criminal case, and $6.2 million restitution to Goldman Sachs.