Infrastructure Output Falls To 2.6% In Dec 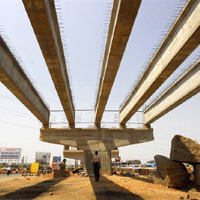 08 November, 2014
Print this article Font size -16+
The growth rate of eight core industries declined to 2.6 per cent in December 2012, from 4.9 per cent in the same month previous year, due to drop in production of coal, natural gas and fertiliser.

The decline in growth in December 2012 was "on account of negative growth witnessed in the production of coal, natural gas and fertiliser", according to the official data released today.

The cumulative expansion of the eight industries -- crude oil, natural gas, cement, coal, electricity, steel, petroleum refinery products and fertilisers -- was down at 3.3 per cent in April-December 2012 against 4.8 per cent in the same period previous year.

The eight industries have a weightage of 37.9 per cent in the overall Index of Industrial Production (IIP).

Production of natural gas and coal contracted by 14.9 per cent and 0.2 per cent, respectively, in the month under review. Fertiliser output too shrunk by 3.8 per cent against 0.8 per cent growth in December 2011.

However, Crude oil and petroleum refinery output grew by 1 per cent and 5 per cent against the fall of 5.5 per cent and 0.7 per cent, respectively, in December 2011.

The growth of eight core sector industries had declined to 1.8 per cent in November 2012.