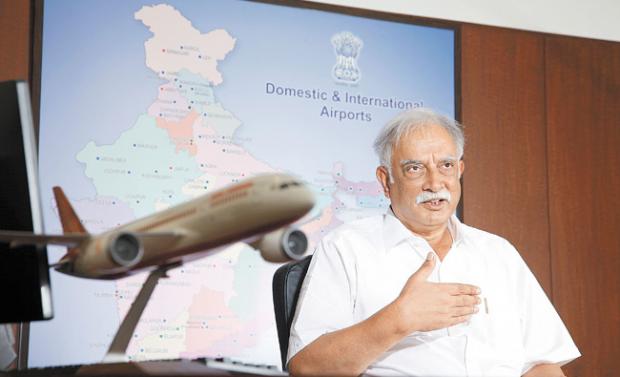 Exploiting the underutilised bilaterals and taking advantage of the open sky for the SAARC nations can give a fillip to the tourism sector in India, said the Civil Aviation minister Ashok Gajapathi Raju on Thursday (23 July). Sending out a strong message to Indian carriers, the civil aviation minister said domestic airlines, both public and private ones, need to "pull up their socks" with regard to utilisation of bilaterals. "As far as I know, India has lot of unused bilaterals and so just Indian players need to pull up their socks... Of course, foreign carriers are going to ask for more bilaterals," Raju said.
A bilateral transport pact or air services agreement, allows flight services between two countries.
"A solution is that Indian players start using Indian bilaterals... Almost all the private airlines are also sitting on bilaterals. So, I guess this problem has to be addressed," Raju said. The Minister said he has been requesting airlines to use the bilaterals because if they don't, then India loses out.
Raju said that tourism sector needed the Central and State governments to work in harmony with the private sector. He urged the industry to share an actionable paper with his Ministry to take forward the agenda of promoting the sector. The civil aviation minister was speaking at a tourism conference organised by FICCI in partnership with the Ministry of Tourism, Government of India and Tourism Finance Corporation of India (TFCI).
Speaking on the occasion, Dr Mahesh Sharma, the minister of State (IC), Tourism ministry said that the highest priority should be accorded to improving India’s perception abroad. As a country, India must be looked at as a congenial and conducive environment by foreign tourists. He added that it was imperative for citizens to cherish the country’s heritage and communicate its richness to visitors.
Sharma said that for tourism to thrive it was essential that infrastructure development and regional connectivity went hand-in-hand. Ministries and States need to come on-board for this and issues related to the sector must be resolved within a stipulated timeframe in a single window approach, he added.
Speaking on medical tourism, Dr. Sharma said that India has lagged behind in medical tourism despite its competitive pricing of health care delivery. For instance, a heart surgery may cost a person in Europe around Rs. 15-20 lakh but in India the same would cost approximately Rs. 2 lakh. Yet, we have not been able to realize the true potential as the sector remains unorganized, he added.
To promote tourist destinations, Dr. Sharma proposed that visual presentations and interactive audio-visual media should be employed to make the experience of visitors to heritage sites and monuments lively and engrossing. He added that social interaction needs to be revived to showcase India’s heritage on the global platform.
Dr  Jyotsna Suri, President, FICCI, said that foreign tourist arrivals in India in 2014 was 7.7 million with a foreign exchange earning of Rs. 120083 crore. Indian tourism grew at 10.6% while the world tourism at 4.4%. With this projected growth, the country witnesses a void as the infrastructure struggles to cope with the demand in tourism. She added that TIM has been conceptualized with the aim to bridge this gap by bringing together the policy makers and investors on the same platform.
Tags assigned to this article:
ashok gajapathi raju tourism development ashish sinha