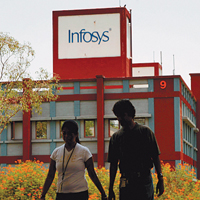 08 November, 2014
Print this article Font size -16+
Infosys defied some analysts' expectations and retained its revenue growth forecast for the full year, a sign that India's second largest software services exporter was confident it could regain lost market share. On Friday (12 July), Infosys reported a 3.7 per cent year-on-year increase in its consolidated net profit for the first quarter. Consolidated net profit for the quarter ended 30 June rose to Rs 2,374 crore from Rs 2,289 crore in the same year-ago period, Bangalore-based Infosys said.

Most analysts had expected Infosys to maintain its forecast for 6-10 per cent revenue growth for the current 2013-14 financial year, but Morgan Stanley raised doubts last week, saying the company would cut estimates to 4-6 per cent. Investors cheered the forecast, sending Infosys shares nearly 15 per cent higher to their loftiest in almost three months.

"Generally you can conclude that the worst is over for them but it remains to be seen how quickly they can recover from here," said Phani Sekhar, fund manager at Mumbai-based Angel Broking, which holds shares in Infosys. "We need to watch whether the management sees any air pockets going forward."

Infosys's revenue growth forecast still lags the 12-14 per cent growth outlook for the sector made by local IT industry lobby National Association of Software and Services Companies, highlighting the challenges facing the company's management.

The company also has to regain investors' trust its ability to deliver strong earnings after almost two years of disappointing results.

Last quarter, Infosys forecast full-year sales growth that missed analyst expectations by a margin of up to 50 per cent, sending its shares down as much as about 20 per cent.
Read Also: Infosys Sales Head Basab Pradhan Quits
Read Also: The Return Of Mr Murthy
Read Also: Grievances Galore At Infosys AGM

"Infosys has beaten our lowered expectations and its guidance has been maintained," said Sandip Sabharwal, CEO of Portfolio Management Services at Mumbai-based brokerage Prabhudas Lilladher which holds Infosys stock.

"One shouldn't be too euphoric though for the stock as there are a lot of management and structural changes that need to happen."

An attempt to earn a bigger share of revenue from proprietary software, at the expense of IT outsourcing contracts, saw Infosys losing out to rival Tata Consultancy Services.

Infosys brought back founder Narayana Murthy as executive chairman on June 1 to revive the company, and his efforts may get a boost from forecasts that 2014 will see the strongest demand for technology from US government institutions and businesses since the 2008 global financial crisis.

"Despite facing an uncertain macro environment, changing regulatory regime and a volatile currency environment, we have done well in Q1 and are cautiously optimistic about rest of the year," CEO S.D. Shibulal said in a statement.

Infosys also said its margins may be affected in future quarters due to previously announced compensation increases. In June, the company had said it would raise salaries for all eligible staff.

At 10:19 a.m., shares of the company were up 11 per cent at Rs 2,803 after touching Rs 2,905.60, their highest since 11 April.
(Reuters)
Tags assigned to this article:
top 1 infosys nr narayana murthy software services quarterly earnings