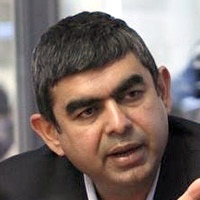 08 November, 2014
Print this article Font size -16+
Former SAP Executive Board member Vishal Sikka will take over as the new CEO and MD of Infosys Ltd, according to a company release. Sikka will assume charge from June14.

He will be the fifth CEO and the first non-founder in the company’s 33 year history. Prior to this N R Narayana Murthy, Nandan Nilekani, Kris Gopalakrishnan and Shibu Lal who all co-founded the company have lead it.

A year back N R Narayana Murthy who had come out of retirement to assume charge as Executive Chairman, will retire and will be made Chairman Emeritus from October. Murthy’s son Rohan whose appointment as his executive assistant attracted a lot of scruitny is also stepping down immediately from his role.

Vishal Sikka the new CEO and MD designate is a well know figure in the international technology circles. Sikka the son of a Indian Railway officer studied in Gujarat before moving to the USA where he started and sold a couple of companies.

At his previous job at SAP, Sikka was credited with creating SAP’s successful HANA line of offerings. Analysts and brokerage house cautiously welcomed Sikka’s appointment. “He is a product guy and it would be interesting how his vision and execution play out in the services space,” said the VP of a competitor who did not want to be named.

Infosys has been struggling in recent years to grow at the same pace as its peers like TCS, HCL and Cognizant. Shibulal the outgoing CEO and MD will also retire from the board from July end. K V Kamath will become the non-executive Chairman of the company.