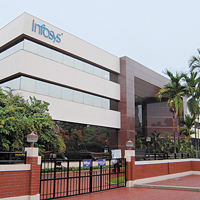 08 November, 2014
Print this article Font size -16+
Infosys October-December quarterly earnings could fall 1.8 per cent short of consensus expectations, while revenues may disappoint by 3.2 per cent, according to Thomson Reuters StarMine estimates.

Mean consensus earnings per share (EPS) estimates for Infosys Q3 stands at Rs 39.62 compared with Smart Estimate of Rs 38.91, which measures only the forecasts from top-ranked analysts.

The BSE Sensex ended flat on 10 January as Infosys and other software services exporters  fell ahead of quarterly results, while cement makers slipped on near-term outlook concerns.

"Infosys' earnings and guidance would set the mood for the Q3 earnings season, which would be key for

Consulting strategy and possible acquisition targets would be key for Infosys, Choksey added.