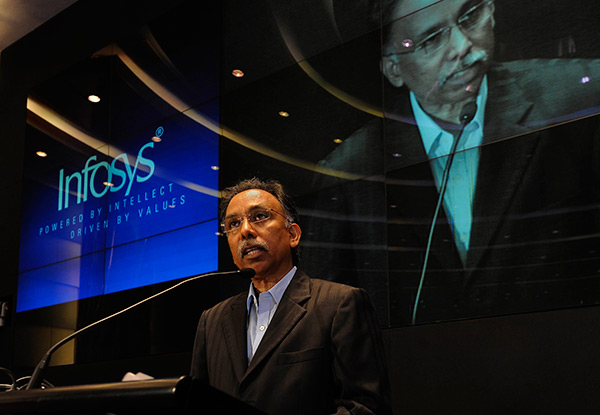 08 November, 2014
Print this article Font size -16+
Infosys Ltd hopes a return to aggressively chasing deals, even those with low margins, will help it regain lost market share but cut-throat competition and a possible change in US visa rules may derail its plans.

A focus on proprietary software at the expense of IT outsourcing contracts prompted India's second largest IT exporter to post two years of disappointing results and left it struggling to compete with local rivals Tata Consultancy Services Ltd and HCL Technologies Ltd.

After reporting its latest quarterly earnings on Friday, CEO S.D. Shibulal said big IT contracts were now a priority. Infosys also maintained its revenue growth forecast for the current 2013/14 financial year, defying some expectations that it would cut its target if the business outlook remained poor and sending its shares up as much as 15 percent.

"The majority of the deals are re-bids and they are price sensitive. The trick is, in the short term they are margin dilutive, but we have to ensure that they are margin neutral over the life of the contract," he added.

Infosys said it had added 66 new clients in the fiscal first quarter that ended June 30. A re-bid is a contract that is up for renewal.

But the revenue growth forecast of 6-10 per cent still lags the 12-14 per cent outlook for the sector made by local IT industry lobby National Association of Software and Services Companies.

And looming large over all Indian IT companies is the possibility that the United States, the sector's biggest market, will implement as early as next year new visa rules that will make it more costly and difficult to send workers there.

Infosys derives 62 per cent of its earnings from North America and is the most exposed of its rivals to the region.

"Generally you can conclude that the worst is over for them but it remains to be seen how quickly they can recover from here," said Phani Sekhar, fund manager at Mumbai-based Angel Broking, which holds shares in Infosys.

Infosys, and its rivals, may get a boost from forecasts that 2014 will see the strongest demand for technology from US government institutions and businesses since the 2008 global financial crisis.

Regaining investors' trust remains a challenge. Infosys stock lost 16 percent of its value last year, but the company has pinned its hopes for a revival on founder Narayana Murthy whom it brought back as executive chairman in June.