Inflation Could Accelerate Due To Rupee Fall: RBI 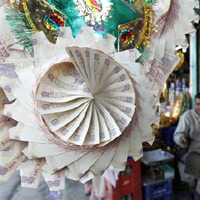 08 November, 2014
Print this article Font size -16+
India's inflation could accelerate in the current fiscal year due to the rupee's sharp depreciation, the Reserve Bank of India (RBI) said in a report on Thursday, 22 August.

The Indian rupee touched record low of 65.52/dollar on Thursday and is down 16 per cent so far this year despite efforts by policymakers to prop it up.

"The pass-through of the depreciation of the rupee exchange rate by about 11 per cent in the four months of 2013-14 is incomplete and will put upward pressure as it continues to feed through to domestic prices," the RBI said in its annual report for the 2012-13 fiscal year ending last March.

Asia's third-largest economy has been pummelled by a selloff in emerging markets, with the rupee the worst performer in Asia this year after the US Federal Reserve indicated it will begin winding down its economic stimulus.

"Risks on the inflation front are still significant," the RBI said.

The rupee's weakness could also increase subsidy payouts for fuel and fertiliser in 2013-14, the central bank said.

However, the report said normal monsoon rains in India have taken a "major risk off the horizon" but said a close vigil was necessary after food prices showed an upsurge during April to July.

"If high food inflation persists into the second half of 2013-14, the risks of generalised inflation could become large," it said.

India's current account gap, which widened to a record high of 4.8 per cent of GDP in the fiscal year to March 2013, is likely to ease in the current fiscal year but may continue to be "much above" the sustainable level, the report said.

"Global risks coupled with domestic structual impediments have dampened prospects of a recovery in 2013-14, and posed immediate challenges for compressing the current account deficit," it said.

The central bank's report added that "utmost attention" is needed to contain risks to financial stability arising from deteriorating asset quality of banks.