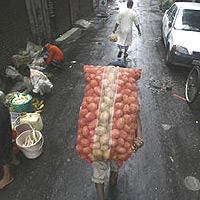 
Most people, one would imagine, do not see stocks and bonds as being the same; inflation can hurt bonds badly because inflation forces interest rate increases, and consequently hurts bond values. Stocks, on the other hand, are driven by earnings expectations, and across a broad swathe of companies, earnings expectations have largely been met.

But investors have become savvier; they recognise that rising prices may have inflated revenue numbers. The survey also suggests that investors have also made adjustments to their investment horizons. If the medium term in the past could have been 18 months, it now ranges between three to five years.

Future outlook has also been tempered. Most investors believe disposable or discretionary incomes may not grow as much in the next six months; and they don't expect much increase in their investments either. All kinds of investment have been hit: savings and time deposits, insurance, stocks, and even gold. Activity in mutual funds and time deposits has been worse hit.

And confidence is not expected to return to previous levels very soon. The policy-making community — led by the Reserve Bank of India — seems to be saying that growth will ‘moderate', but many fear that it could be by more than a little. By how much, perhaps the next wave of the ICI will tell us.

Click here to view 'Zeroing In On Money Markets'