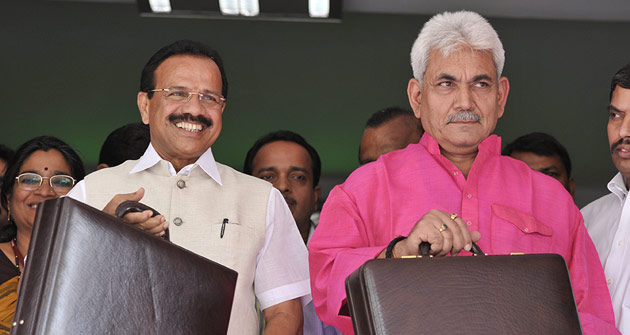 08 November, 2014
Print this article Font size -16+
Government on Tuesday (8 July) proposed "highest ever" plan outlay of Rs 65,445 crore to the railways for the current fiscal, with a budgetary support of over Rs 30,000 crore.

Presenting the Railway Budget for 2014-15, Railway Minister Sadananda Gowda said the "highest ever plan outlay" would include market borrowing of Rs 11,790 crore and internal resources of Rs 15,350 crore. Let's read how industry reacts after the railway budget presented::

Nadir Godrej, Chairman, CII National Committee on Chemicals
The chemical industry welcomes the Railway Budget, which is aimed at bringing a new life to railways as well as industries dependent on it. We welcome the fact that the Railway Budget 2014- 15 emphasizes technology and customer satisfaction. We are particularly appreciative of dedicated freight corridors on the Eastern and Western sectors of the Golden Quadrilateral. These freight corridors will help advance the growth of the developing parts of east and north east India- learnings can be taken from the western corridor. The chemical industry also welcomes the initiative by the ministry of increasing port connectivity by rail in PPP mode.  Movement of goods from and to ports is critical- this will surely help create jobs in the export sector in inland locations having rail connectivity. Special emphasis on the development of logistics will not only help movement of fertilisers and large commodities and give flexibility to EXIM trade which are crucial for the industry but also create jobs in the export sector. The launch of first bullet train on Mumbai-Ahmedabad route will help companies in the chemical industry from an operational standpoint as most of the manufacturing units are based along this corridor. The use of biodiesel at 5 per cent is also a welcome move. The chemical industry will look to producing more biodiesel.

Vineet Agarwal, MD, Transport Corporation of India
“This year’s railway budget has been encouraging for the logistics players. The decision to introduce high speed trains for timely delivery of goods and services fulfils our long pending demand. We hope that the continuous push to electrification, gauge conversion and new lines will make the railways and the logistics sector more efficient.

FDI to ensure funds and expertise for the development world-class rail infrastructure and decision to go ahead with PPP projects will lead to rapid modernization of railways. Plans to increase the capacity of cargo containers, restructuring of the railway board and set-up independent Rail Tariff Authority to advise on fixing of fares and freight and to engage all stake-holders will make railways more competitive. TCI had recommended Multimodal Policy for domestic market for seamless connectivity across different modes of transportation. However, there is no mention of the same in the rail budget.

We are of the view that introduction of corrosion resistant, lighter wagons with higher pay-load and speed potential upto 100kmph; tariff and incentive schemes to encourage traffic to rail and minimizing empty running will make transportation by railways a viable option for logistics players.  The focus on improving country's freight network by setting - up a dedicated freight corridor on the Eastern and Western Routes and third party warehousing in Special Parcel Terminals will lead to critical capacity augmentation thus facilitating faster movement of goods and de-congestion of existing routes.  We hope that this policy will later be extended to the entire time-sensitive cargo segment.”

Manish Agarwal, Leader Capital Projects and Infrastructure, PwC India
The railway budget 2014- 15 is quite practical in focusing on completing ongoing projects, and enabling online tracking of project status. Focus on one bullet train initially, and up-gradation of existing infrastructure for higher speeds on other sectors, is a good balance between affordability and desire. The intention to develop a rational approach to tariff setting, and for determining stops of express trains, is welcome. Some thought seems to have been given on the need for different PPP models (user-charge based, annuities), as well as potential areas for leveraging PPP capability; however, given limited success on station-modernisation projects so far, the implementation roll out remains to be seen.

S. V. Sukumar, Partner, Management Consulting, Head Strategy & Operations Practice, KPMG in India
Arvind Mahajan, Partner and Head of Infrastructure and Government Services, KPMG in India
IR Budget this year is definitely a significant departure from the past in terms of focus on passenger amenities, adoption of technology, capacity building and commercial soundness. Focus on passenger amenities gets a significant boost compared to the past and the facilities hereto available at airports only will be now be available at the railway stations. The introduction of bullet trains, high speed trains, upgradation of IT infrastructure including next generation e-reservation system are the steps in the right direction and addresses the long felt need of modernizing the Indian Railways and making it customer friendly. We also welcome the steps for creation of Project management Unit at Railway Board, Railway University, Strategic procurement policy including –procurement towards capacity building and long term robustness of IR operations. While there was discussion on PPP and FDI in IR, the budget speech lacked details and the announcements in the coming weeks will be important to understand the specifics. Having said that it is the step in right direction and it will be to the benefit of nation at large that these steps are implemented sooner. What we missed was any discussion on Railway Tariff Authority as it is critical for attractive private investment in Indian railways. Overall, the Railway Minister did touch upon key aspects and has shown the intent to turnaround IR into a commercially viable and customer friendly organisation but the specifics of few announcements are awaited.

Nalin Jain, Business Leader, South Asia, GE Transportation
The rail budget announced by the new government today is positive and in line with expectations from the Modi government.

In all these years, we have had new policies and vision, but less focus on implementation and execution. In contrast, this budget is action oriented, having clear focus on implementation and intended to make Railways a commercially viable organisation. We welcome government’s participatory approach and encouragement to private sector participation. Indian railway is currently making losses and there is lack of funds and required infrastructure. Having private sector participation and opening gates for FDI will fill the gap and give desired boost to railways. The emphasis on prioritising projects which are crucial in nature is another signal towards growth. Measures towards safety and comfort of passengers will add to travellers’ experience.

Jaijit Bhattacharya, Partner, Infrastructure and Government Services, KPMG in India
“The budget appears to be very well thought out and having something for all its stakeholders without being populist.

The budget provides the much needed strategic financial headroom required for the railways to enable it to make the necessary critical investments into modernization and expansion. The much needed support for PPP as a significant source of investment capital is the backbone of providing the strategic financial headspace.
The overall movement towards reforms in the railways board is a welcome step toward what we hope is finally corporatisation of Indian railways. We believe that would give the railways the agility to modernize itself.

However, in addition to all the positive steps laid out in the rail budget, it would have been helpful if there was focus on non-traffic revenue generation to enhance profitability of railways. Also, measures should be adopted to enhance domestic capability for modernization of railways.”

Ajay S Shriram, President CII
The Rail Budget has presented a broad vision on what needs to be done in this critical sector in order to upgrade infrastructure and improve operational efficiency.   CII welcomes the ambition to be the largest freight carrier in the world, as presented in the Railway Budget.  The Minister has been realistic and candid in acknowledging the problems faced in implementation of projects and improving revenue realisation”.

Addressing Press and Media, Mr. Sumit Mazumder, President Designate CII and Chairman, CII Special Task Force on Railways stated that “The Minister has presented a practical and execution-oriented Budget, laying emphasis on implementation of on-going projects and focusing on monitoring them for an early closure. If projects are made attractive to private investors, funds through PPP and FDI will be available. Multilateral funding should also be accessed for high speed corridors. CII appreciates the increased attention to improvement in passenger amenities and safety”.

Chandrajit Banerjee, Director General, CII
Railway Budget has attempted to deftly strike a fine balance between commercial and welfare objectives to present a credible budget while eschewing populism.  A pragmatic budget, the thrust on increased passenger amenities, cleanliness and efficient station management, greater safely measures and seeking the involvement of corporates to take this forward shows that the budget is anchored in reality. The accent on resource mobilization through the public private partnership (PPP) and FDI and through surplus generated through PSUs is indeed commendable. Similarly, the restructuring of rail board is a bold initiative which would help improve efficiency in the system and pave the way for flexible decision-making and restructuring of railways on commercial lines, stated CII. At the same time, there is an intent to avoid resource generation through borrowing. The proposed setting up of Innovations and Incubation center would also help harness the practical ideas generated by railway staff to improve the functional efficacy of railways. Introducing fuel adjustment component for linking tariffs with movement of fuel prices is a balancing act required to address the financial challenges faced by railways.

It is heartening to note the stress on timely implementation of projects and reducing the time and cost overruns due to tardy project management. In this context, the setting up of the Project Formation & Monitoring Group at the level of Railway Board to help overcome delays in project execution is welcome.  Similarly, to expedite the projects at the ground level, the constitution of Project Monitoring & Coordination Group consisting of officials of State Government, Railways and professionals is timely. The proposal of close monitoring of the execution of Dedicated Freight Corridors is also noteworthy.

Another positive, according to CII, is the accent on rail modernization through the PPP mode, the announcement of bullet train on Mumbai-Ahmedabad sector, increasing the speed of trains in select 9 sectors and plans to set up a Diamond Quadrilateral Network of high speed rail connecting major metros and growth centers of the country. Further, plans to facilitating connectivity to new and upcoming ports through PPP, speedy work on coal connectivity lines, setting up of logistic parks, among others which would push rail services closer to global benchmarks. Expressing concern over the high operating ratio which is expected to be 92.5% in 2014-15, CII feels that this would constrain internal resource mobilization.
Tags assigned to this article:
budget fdi cii ppp economic survey industry reactions pwc india budget deficit kpmg india railway budget 2014 budegt 2014 railway minister sadananda gowda.