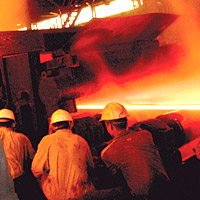 The survey, comparing the expected growth of 103 industrial sectors of the economy for July-September 2012 over July–September 2011, categorises the growth ranges in four broad categories namely excellent (greater than 20 oer cent), good (10-20 per cent), low (0-10 per cent), and negative. While the proportion of companies expecting excellent performance is reported to have shrunk considerably (from 23.8 per cent to 3.8 per cent), the number of sectors that are expecting low growth have risen from 44.7 per cent to 51.4 per cent). Sectors experiencing negative growth has increased from 10.6 per cent to 15.5 per cent). The period under consideration is the July-September quarter of the current year compared to the same period of last year.

Going beyond the Q2, the survey has predicted that it expects the growth slowdown witnessed over the last several quarters to persist in the October-December (Q3) period as well in the wake of continuing bad situation on several fronts including inflation, fiscal deficits, agricultural production and uncertain global economic outlook.


The low growth outlook for the current quarter comes on the heels of a dismal growth performance recorded by industrial sector during the previous quarter (April-June) on year-on-year basis. According to CII ASCON survey, the share of sectors reporting excellent and good performance during April-June, 2012 over the corresponding period of last year contracted heavily from 20.7 per cent to 8.4 per cent and from 31.8 per cent to 14.1 per cent, respectively. Accentuating the problem, there was a sharp increase in share of sectors reporting low growth from 42.2 per cent to 51 per cent while negative growth rose to a whopping 25 per cent from 5.2 per cent in the same period last year.


The only silver lining, according to the survey, is the increase in share of companies expecting high growth performance in the current quarter over the corresponding period of last year. It went up to 29.1 per cent from 20.9 per cent in Q2 2011. This, however, is powerfully outweighed by the sectors reporting deterioration in growth performance during the ongoing quarter in all other categories (excellent, low, and negative).

Expressing concern over the continuous deterioration in the performance of the industrial sector, Chandrajit Banerjee, DG, CII, said that “immediate policy actions are needed both by the government and the Reserve Bank of India (RBI) to arrest further decline in industrial output. The urgency that is required to announce confidence building measures at once, along with reduction in policy rates by RBI cannot be overemphasised. Further, to avoid a downward spiral in industrial output, fiscal measures, such as acceleration of deprecation rate, etc., to promote fresh investments must be announced. There is also the imperative of getting projects moving on the ground, which would lift sentiments and boost investments. This does not entail major political decision or negative impact on revenues of the government.


"The sectors reported to be expecting low / negative growth performance during the current quarter encompass all segments of industry, with far reaching implications on the economy in terms of employment and livelihoods”, added Mr Banerjee.


As regards the consumer durables, survey shows a mixed picture. While automobile shows a clear sign of slowdown, many other sectors have so far been able to betray it. Given that the sales and production of consumer durables are largely driven by rural demand, which may be heavily impacted in the wake of deficient monsoon, demand for consumer durables may come under pressure.

Key infrastructure industries like coal, crude oil, natural gas, refinery products, fertiliser, steel & electricity have reported muted outlook with each sector gripped with its own issues on regulatory front. The subdued outlook in these sectors, among others, can be blamed on the continuing issues pertaining to delays in decisions on mining leases, land acquisition issues, project delays and environmental clearances, high interest rates, and high raw material prices.


To reverse the deteriorating business sentiments, the survey revealed numerous policy actions, both in the fiscal and monetary policy domain. Majority of them favoured reduction in interest rates, quick implementation of GST, fast tracking of large pending projects, re-consideration of the retrospective amendments and GAAR. They emphasised on unshackling the supply bottlenecks that plagues several sectors of the economy.