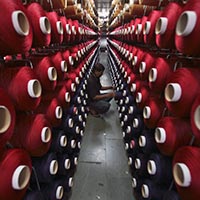 The HSBC Services Purchasing Managers' Index (PMI), compiled by Markit, fell to 52.2 in July from June's 17-month high of 54.4.

The country's dominant services industry hit a rough patch in 2013 and overall activity shrank for nearly a year but starting to expand again in May. A reading above 50 denotes expansion while below signals a contraction.

"Growth in the services sector softened in July after a big jump in the previous month. Nevertheless, the sector recorded its third consecutive month of expansion," said Frederic Neumann, co-head of Asian Economic Research at HSBC.

China's services firms were in a similar situation. Official PMI data released on Monday (4 August) showed growth slipped to a six-month low in July as new orders rose at their weakest pace in almost a year.

While order books were not in as bad a shape among Indian firms, some businesses did defer hiring plans. The employment PMI dipped below the break-even mark to 49.8 from July's 50.1.

The services PMI data also showed input costs rose at a slower rate in July and that firms were able to pass on a slightly bigger portion to customers by raising prices.

"Final prices were marked up at a faster pace to reflect rising costs, underscoring the need for the Reserve Bank of India to remain cautious about inflation risks," said Neumann.

The RBI is expected to keep interest rates steady later on Thursday but toughen up its rhetoric on inflation amid fears of a spike in food prices if monsoon rains are below average.