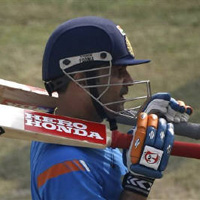 We are building the bats, but people are not recognising us: the sponsors are taking the credit," says Mahajan. Sat in his wood-paneled office, over the sounds of sawing and banging below, Mahajan proudly shows photos of players using BDM bats. But the pictures are undeniably dated: Former superstars carry the logo, but the current crop have followed the money. "We have no issue with Gray Nicholls, or Kookaburra," says Mahajan, referring to the long-established UK and Australia-based equipment manufacturers. "The problem is Nike, Reebok, Adidas, people like Brittania and Hero Honda. They make biscuits and motorbikes, not bats!" BDM employs 300 people in its two factories in Meerut, 80 kilometres north-east of Delhi, where hundreds of sports companies gather at a major hub in the country's estimated 10 billion rupee ($219 million) cricket equipment market. Wood shavings carpet the stone floor of the bat workshop, where scores of workers squat, filing the edges of countless bats to a smooth finish under towers of willow planks and cane handles that climb to the ceiling. Boxes of finished bats pile up in every direction from the factory entrance, ready to be distributed across India and the world to global superstars, academy players and amateur batsmen. World Cup Boom Despite Mahajan's fear of cricket's commercialisation, which exploded with the launch of the billion-dollar Indian Premier League in 2008 that sent player wages and TV rights skyrocketing, he admits the globally-viewed World Cup is good for business. Demand is strong, and Mahajan's sparkling 4x4 on the dusty lane that runs through the industrial estate filled with sports manufacturers attests to BDM's 10-15 percent annual growth. With the first match just weeks away, the factory is churning out 1,200 bats a day for its largest ever order, and to meet soaring demands from schools and local authorities, while sacks are stuffed full of cricket balls branded with carmaker logos for promotional release during the tournament, which begins Feb 19. The company produces an average of 150,000 bats and 220,000 balls every year, using willow from England and India's northern Kashmir region. Ten percent of its products are exported, mainly to the cricket heartlands of the UK, Australia and Pakistan. English willow bats sell for 12,000 rupees ($263), while those made from Kashmiri wood range between 500 and 1,200 rupees ($11-$26).

BDM's balls cost retailers 60-600 rupees ($1.30-$13). "For the top bats, willow is imported from England, and cane for the handle is imported from Singapore. From India comes the labour and the technique," says Mahajan. His is a very local operation. Having filled its dingy ball factory, BDM has turned to local villagers, who collect scores of unstitched balls and return with the finished products a few days later, which will be used in professional matches across the country. Yet when these balls are smashed around stadiums by India's top batsmen, hundreds of millions of adoring young fans will see the logos of international sports brands and other firms, rather than the domestic producers such as BDM, and its Meerut-based competitors Sanspareils Greenlands and Sareen Sports Industries. They still count global superstars as customers. In the factory's reception, a huge kit bag stuffed full of BDM equipment sits ready to be delivered. The name of Sanath Jayasuria, Sri Lanka's big-hitting all rounder, is emblazoned across the top in shining silver letters. "The top players come in and want to feel the wood before we make their bats. They want to test the quality, thickness and the speed that the ball comes off it," says Lalit Verma, factory supervisor. "They know we can give them what they want." "We are the leaders, the pioneers in this country," says Mahajan defiantly. "Reebok is here, Nike is here, but our business is growing, because the right people know who the real manufacturers are." (Reuters)