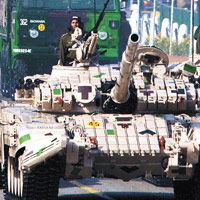 08 November, 2014
Print this article Font size -16+
Some of India's biggest companies are pouring billions of dollars into manufacturing guns, ships and tanks for the country's military, buoyed by the new government's commitment to upgrade its armed forces using domestic factories.

India, the world's largest arms importer, will spend $250 billion in the next decade on kit, analysts estimate, to upgrade its Soviet-era military and narrow the gap with China, which spends $120 billion a year on defence.

Even before his landslide election victory in May, Prime Minister Narendra Modi promised to assert India's military prowess and meet the security challenge posed by a rising China and long-running tensions with Pakistan.

Within weeks of becoming prime minister, he boosted defence spending by 12 per cent to around $37 billion for the current fiscal year and approved plans to allow more foreign investment into local industry to jump-start production.

Launching a new, Indian-built naval destroyer last week, Modi said: "My government has taken important steps in improving indigenous defence technology ... We can guarantee peace if our military is modernised."

This build-up comes as Southeast Asian nations expand their own defence industries, spurred by tensions with China. India, reliant on a state defence industry that often delivers late and over budget, risks being caught flat-footed.

"We really expect quicker implementation. There are signs that this government is very keen to grow indigenisation," added Kotwal, referring to increasing domestic production.

Tata Sons, a $100 billion conglomerate, said last month it will invest $35 billion in the next three years to expand into new areas with a focus on a handful of sectors including defence.

Larsen is putting $400 million into a yard to build ships for the navy, while Mumbai-based Mahindra Group is expanding a facility that makes parts for planes, including for the air force, and investing in armoured vehicle and radar production.

The companies are being lured by the prospect of lucrative returns on their investments as the Modi government has pledged to make "buy Indian" the default option for future orders.

Larsen is targeting a fourfold increase in annual defence revenue to $1 billion within the next five years.

Critics of indigenisation argue that producing gear - especially in the lumbering state sector - is more costly than buying from abroad. Such deals can add layers of bureaucracy, increasing risks of corrupt dealings.

Indian industry is renowned for its ability to adapt, yet questions remain whether the private sector can come up with the solutions needed to bring armed forces into the 21st century without sufficient access to world-class foreign technology.

Delays
Some companies are also sceptical of the government's commitment to grow the private market given New Delhi's history of delays and order cancellations, and the traditionally strong ties between the military and state-run manufacturers.

They cite the case of a $10 billion Future Infantry Combat Vehicle (FICV) programme. Conceived in 2009, the defence ministry invited three private players and the Ordnance Factory Board, a state entity, to bid for the 2,600-vehicle contract but suddenly withdrew the letter of intent in 2012.

Bidders included Mahindra and Tata, which is developing a vehicle along with Lockheed Martin Corp and General Dynamics Corp that could compete for a future contract, said Rahul Gajare, an analyst at Edelweiss Securities.

A quick decision to relaunch the programme would demonstrate Modi's resolve, said S.P. Shukla, who heads Mahindra's defence business. Past tenders have stalled amid wrangling over whether or not to allow state manufacturers to bid and under what terms.

Larsen's Kotwal said its Kattupalli shipyard in south India has yet to receive any orders for warships or submarines despite being designed to do just that and despite past government pledges to build at least two submarines in private yards.

In the meantime, the yard has switched to constructing and repairing commercial vessels.

"The policy in India has been right since 2006. The problem has been implementation," said Rahul Chaudhry, CEO at Tata Power SED, which makes rocket launchers, sensors and radars.

Local firms have captured a fraction of the Indian defence market since it first opened to private participation in 2001. Consecutive governments have handed orders to state factories or to foreign giants like Boeing, Lockheed and BAE Systems.

Gajare at Edelweiss estimates total India private sector revenues from defence, including overseas orders, at below $2 billion last year, less than 6 per cent of the country's defence spending.