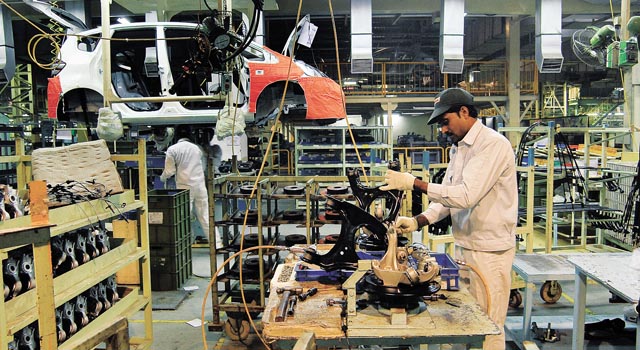 21 July, 2015
Print this article Font size -16+
Calling a turn in a business cycle is a big task. Edelweiss Securities Ltd, in its report, Economy-A step across the line, says there are small signs of a recovery being underway. A perusal of select high frequency indicators reveals that economic recovery is firming up since the past six months. Manufacturing activity has improved on trend basis (primarily capital goods, but consumer goods production as well) and this coincides with the pick-up in imports of machinery goods, turnaround in new investment projects and decline in the number of stalled projects. In fact, order books of capital goods companies too are clocking decent traction. Notably, these indicators have improved despite strong headwinds from scale back in government expenditure, slowdown in merchandise exports and tepid rural sentiments over the past six months.
BoP improvement 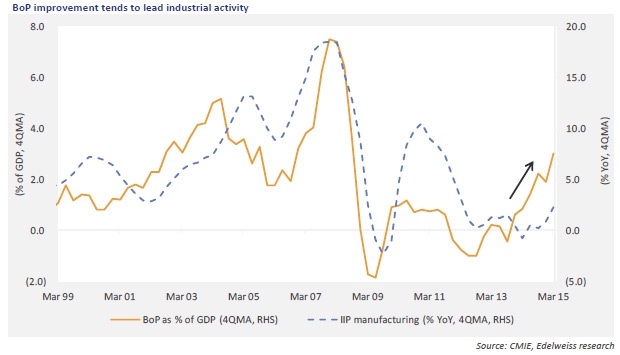 In the past one year, balance of payment (BoP) dynamics have turned around. Large capital inflows (and associated BoP surpluses) are working to ease domestic monetary conditions, lower market interest rates and improve business confidence. Thus, while bank lending is still sluggish, non-bank sources of financing (equity and debt) have picked up, such that aggregate credit flow to the economy has stabilised and picked up in real terms. All this is reflected in traction in domestic economic activity.
The only area where vulnerability or risk arises is sustainability of flows, given that inflows have been dominated by portfolio flows, especially debt flows, which can reverse direction fairly quickly.
Macro-policies squeeze unwinding
As the economy faced adverse BoP shock amidst large current account deficit (CAD) and high inflation in 2011, policymakers were forced to pursue pro-cyclical belt-tightening to close/narrow the current account gap and contain inflation, reinforcing the downturn. Fiscal impulse is expected to be mildly positive in FY16 after five consecutive years of drag, while the RBI has commenced rate easing cycle. More needs to be done given that corporate real rates are high and the yield curve is largely flat, implying Mint Street is still behind the curve.
More importantly, the fiscal drag of the past five years is receding, with the fiscal mix becoming more constructive. Policymakers need to accelerate this process as exports and rural demand are weak, while burdensome legacies of the downturn (high debt and large non-performing assets, or NPAs) still persist. Policymakers should take comfort from the fact that with favourable terms of trade and idle capacities, risks to inflation and CAD are minimal.
Fiscal is now turning supportive
As e good news is that with inflation falling to more comfortable levels, fiscal and monetary drag is beginning to unwind. FY16 will be the first year in past 5 years when fiscal impulse to the economy will turn positive. Early trends in government's FY16 expenditure indicate that it is clearly front loading spending, providing the much need push to demand.
The risks
Emerging markets are characterized by noticeable deterioration in external capital flows (falling foreign exchange reserves) and weakening economic activity.
Though starkly evident among commodity exporters, China deserves special attention. While its global economic linkages are well documented, its financial linkages, too, have jumped dramatically as it has accumulated foreign liabilities of $2 trillion. Any escalation of risk can adversely impact domestic recovery through BoP or exchange rate channel, especially when the economy is still weak characterized by poor demand, high NPAs and stretched balance sheets. If there is any rise in risk aversion, it will spill over to India.
It is imperative that domestic fiscal and monetary policies turn focus on reviving growth.
Two areas of demand weakness need special mention. One is manufactured exports, which have barely grown over the past four years and perhaps will continue to remain a source of demand weakness, much in line with the global trend. Second is the rural sector which, over the past year, has been squeezed by weak output, prices and wages. Of course, if the monsoon is good this year, it will certainly be helpful in terms of output, but the larger point is that the rural economy has been caught on the wrong side of global terms of trade. Global food prices have an important bearing on general prosperity in the farm sector.
In totality, the economy is showing signs of recovery and risks of macroeconomic excesses such as a quick run-up in inflation or CAD seem remote in this recovery cycle. Yet, it is still a nascent, and perhaps uneven, recovery, which is yet to become broad-based or a full-fledged virtuous cycle. Businesses and banks still face significant stress in terms of large idle capacities, stretched balance sheets or high NPAs. Domestic macroeconomic policies need to step up their support to the economy.
(Edited excerpts from Edelweiss Securities’ report, Economy-A step across the line)
Tags assigned to this article:
indian economy manufacturing rbi inflation bop cad fiscal deficit