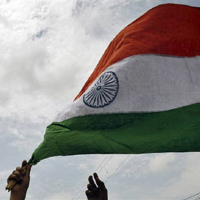 08 November, 2014
Print this article Font size -16+
India's economy is projected to grow at a slower-than-expected rate of 5.3 per cent this year, according to a United Nations report which said the country's slowdown may have bottomed out.

The UN World Economic Situation and Prospects 2014 (WESP) report said a mild recovery in investment as well as stronger export growth will help in the gradual GDP pick-up.

It said the Indian economy, which accounts for over 70 per cent of total output in South Asia, slowed further in 2013.

The growth was held back by weak household consumption and sluggish investment, the report
added.

It said external conditions continued to be challenging as the Indian economy experienced significant capital outflows, which led to a sharp depreciation of?the rupee.

"While India's slowdown may have bottomed out, the recovery is likely to be slower than previously expected.

It said the gradual pick-up in GDP growth is likely to be supported by good monsoon,  recovery in investment and stronger export growth on the back of improved global conditions.

The report further said that global economic growth is expected to increase over the next two years with continuing signs of improvement.

"The euro area has finally ended a protracted recession.

Growth in the United States strengthened somewhat. A few large emerging economies, including
China and India, managed to backstop the deceleration they experienced in the past two years
and veered upwards moderately. These factors point to increasing global growth," the report said.

It said the central government is unlikely to meet its target of reducing the deficit to 4.8 per cent of GDP in the current fiscal year 2013/14,?since growth is below projections and the depreciation of the rupee pushes up the subsidy bill.

On consumer price inflation, the report said India will witness a slight dip in inflation at 9 per cent in 2014 from 9.7 per cent in the previous year. Inflation could dip further to 8.1 per cent in 2015, it said.

"While the Reserve Bank of India is expected to maintain its focus on inflation, it is unlikely to raise policy rates considerably given the ongoing weakness in investment and growth. Should inflationary pressures ease in 2014 and the external financial environment stabilise, the RBI is likely to loosen monetary conditions," the report added.

Among emerging economies, declines and volatility in capital inflows have been most pronounced in Asia.

Declines of capital inflows were found to be more acute in countries like Brazil and India because of the relatively high degree of liquidity in these markets, accompanied by sharp depreciations of the local currencies.

Economic growth in South Asia remained lacklustre in 2013 as a combination of internal and external factors hampered activity, particularly in the region's?major economies such as India, Iran and Pakistan.

The region's total gross domestic product?grew by 3.9 per cent in 2013, the slowest pace in almost two decades, after increasing by 4.2 per cent in 2012.

Growth is forecast to pick up gradually to 4.6 per cent in 2014 and 5.1 per cent in 2015,  supported by stronger external demand, a mild recovery in domestic?demand in India and improved economic conditions in Iran.

In the United States, fiscal tightening and a series of political gridlocks over budgetary issues weighed heavily on growth.

The US labour market and housing sector continued to recover and the country's GDP is
expected to increase by 2.5 per cent in 2014.

The report stressed that the risks associated with a possible bumpy exit from the quantitative easing programmes by the US Federal Reserve threaten the global?economy.

"Efforts by the Fed to pull out of quantitative easing programmes could lead to a surge in long-term interest rates in developed and developing countries," the report added.