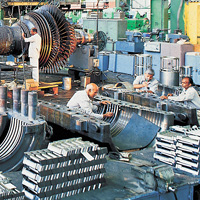 08 November, 2014
Print this article Font size -16+
India expanded at a faster rate than China in February even as emerging market economies witnessed a moderation in economic growth, an HSBC survey said on Wednesday, 6 March, 2013.

The HSBC Emerging Markets Index (EMI), a monthly indicator derived from the PMI surveys, fell from 53.8 in January to 52.3 in February. This is the lowest figure since August 2012 and indicated a moderation in economic growth in global emerging markets.

During February, the HSBC composite index for India, which maps both manufacturing and services sectors, stood at 54.8, whereas for China it was 51.4. However, it was Russia which grew even faster among BRIC nations with its index at 54.9.

An index measure of above 50 indicates expansion.

Among the largest economies covered, growth rates slowed in China, India and Brazil in February, but India expanded more than China.
Services PMI At Its Lowest In February

"Emerging Market economies continued to expand in February but the pace of growth lost steam. The slowdown appears to be broad-based across manufacturing and services, with BRIC activity moderating after a promising start to the new year," HSBC Chief Economist, Central and Eastern Europe and Sub-Saharan Africa Murat Ulgen said.

All four BRIC economies -- Brazil, Russia, India and China -- registered slower increases in new business since January. Moreover, employment also rose at the weakest rate in three months, HSBC said. Softer increases in output were evident in both the manufacturing and services sectors of the BRIC countries (except for India, were goods production growth accelerated).

"The fall in the index shows that for now growth is still the big issue for emerging markets and that for many economies, inflation is set to remain a secondary issue," Ulgen said.

In manufacturing, The rate of expansion in China’s manufacturing sector eased in February. New orders rose for the fifth successive month, but at a modest pace. New export orders also increased at a fractional rate. Reflective of higher levels of total new business, production in the Indian manufacturing sector rose during February. The pace of growth was solid, and faster than that seen in January. Purchasing activity expanded at the quickest rate in nine months.

Chinese business expectations brightened again in February, with the strongest degree of positive sentiment since April 2012, the first month of data collection for the combined manufacturing and services future output series.

In contrast, the 12-month output outlook moderated in Russia to the weakest in six months, while the strength of business expectations was unchanged since January
in India.

Going ahead, the emerging markets either can be expected to "wobble along", buffeted by worries in the developed world or the current slowdown will prove "temporary".

"For now, we lean towards the second scenario," HSBC Chief Economist Ulgen said wherein "the current slowdown will prove temporary as the inventory cycle works its way through and improved underlying fundamentals bring back the days of strong growth".

Meanwhile, business expectation for the next 12 months continue to be robust.

Global Scenario
PMI fell from 53.8 in January to 52.3 in February. That was the lowest figure since August 2012 and indicated a moderation in economic growth in global emerging markets.  Data broken down by broad sector showed that the  slowdown in the pace of expansion was broad-based  across service providers and manufacturers. Goods  production rose at the slowest rate since November, while services activity growth eased to a six-month low.

New business growth in emerging markets slowed to a six-month low in February, and was also weaker than the trend shown over the course of 2012. All four BRIC economies registered slower increases in new business since January. Meanwhile, employment rose at the weakest rate in three months.

The rate of input price inflation in emerging markets accelerated to a ten-month high in February, with broadly similar increases seen in manufacturing and services. Meanwhile, prices charged for goods and services rose for the sixth successive month, albeit at a modest rate.