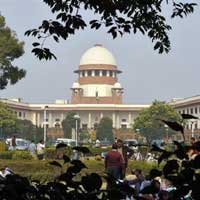 08 November, 2014
Print this article Font size -16+
India's Supreme Court lifted on 2 April' 2013 a three-week order banning Italy's ambassador from leaving the country after Italy sent two marines back to India to face trial over the deaths of two Indian fishermen.
The court had earlier banned the ambassador, Daniele Mancini, from leaving after Italy announced it would not send the accused marines back after a home visit. But the Italian government changed its mind and sent the two back on March 22.
"It's good news," Diljeet Titus, a lawyer representing the Italian marines, said of the court's decision.
"The travel restriction on the ambassador has been vacated as the undertaking was complied with, Italy kept its word."
The accused, Massimiliano Latorre and Salvatore Girone, are charged with murder for shooting the two fishermen off the coast of the southern state of Kerala last year while serving as security guards on a cargo ship.
They say they fired warning shots at a fishing boat believing it to be a pirate vessel.
The case has caused outrage in Italy, which says the incident happened in international waters and the men should not be tried in India. Foreign Minister Giulio Terzi resigned over the decision to return the pair to India.
The marines are due to be tried in a special federal court in New Delhi, but the court has yet to be established.
"The government has sought time, saying they are taking steps to form this special court. But they have nothing to show for it," said Titus.
Rome's right wing mayor plans to turn off the lights of ancient landmarks the Colosseum and the Imperial Forum for the first time on Wednesday to "draw attention to the shameful case of the two marines".
Also on Wednesday, Italian neo-fascist group Casapound is due to protest in front of the seat of government in Rome, calling for Italy to close its embassy to India and to expel the Indian ambassador. The group also wants outgoing Prime Minister Mario Monti to resign his position as Senator for life.