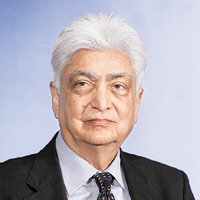 08 November, 2014
Print this article Font size -16+
Philanthropy may be a new trend for Indian businessmen, but over the past few years, some of the biggest tycoons have demonstrated that their legacy is not going to be about just building a flourishing business. They are sharing their wealth to better the life of the underprivileged sections by providing access to health services, clean drinking water and education, among other things.
Azim Premji
Over Rs 20, 500 crore
In February 2013, Azim Premji transferred a 12 per cent stake in Wipro, valued at $2.3 billion, to his eponymous education-focused charitable foundation. So far, he has donated a 20 per cent stake in Wipro worth about $4.4 billion. He is believed to be the biggest donor in Asia. Known for his frugal lifestyle, the Wipro chairman has set an example for others to emulate.
Shiv Nadar
Over Rs 2,000 crore
The HCL founder has donated around $411 million. Some of his donations have been channeled to the Shiv Nadar Foundation, which funds educational causes in India. In one of his biggest philanthropic activities, he had, in 2011, given away over Rs 580 crore by selling 2.5 per cent stake in the company.
Grandhi Mallikarjuna Rao
Rs 1,540 crore
Head of infrastructure company GMR Group, Rao has donated about $340 million. He supports various causes, including education, arts, culture and humanities, health and public social benefits.  He also supports vocational training for the underprivileged.
Nandan Nilekani
Rs 300 crore
The former Infosys boss and current chairman of the Unique Identification Authority of India has donated about $59 million to various causes. In the past he has gifted 14,000 Infosys shares to IIT Bombay and in 2011, he donated Rs 50 crore to the Indian Institute for Human Settlements. Nilekani’s wife Rohini has set up Arghyam, a charitable foundation that works in water and sanitation sectors.
Ratan Tata
Rs 271 crore
Tata, who stepped down as chairman of the Tata group of companies last December, donated $50 million to the
Harvard Business School from the Sir Dorabji Tata Trust and the Tata Education and Development Trust in October 2010. He supports various causes such as education and arts.
Vineet Nayar
Rs 134 crore
The vice chairman and CEO of HCL Technologies has reportedly sold his entire stake in the company for Rs 134 crore. He runs Sampark, a non-governmental organisation (NGO) that works among underprivileged children in Pantnagar.
Bhavarlal Jain
Rs 31 crore
The founder chairman of Jain Irrigation Systems has reportedly given away $6 million for various causes such as education, health, public social benefits and the environment. He sponsors the Gandhi Research
Foundation, an international centre for Gandhian study, research and dialogue along with his wife Kantabai Jain and Jain Irrigation.
N.R. Narayana Murthy
Rs 50 crore
The Infosys founder has donated $11 million to various causes, including health and sanitation. Narayana Murthy donated $5.2 million to Harvard University to publish ‘The Murthy Classical Library of India’. The library will translate Indian literature, and some texts as old as 1,500 years from various Indian languages.

Anand Mahindra
Rs 46 crore
In 2010, the Mahindra & Mahindra chairman donated $10 million to his alma mater, Harvard University. The amount donated to The Humanities Center will be used to promote scholarships, conferences, discussions and workshops.
Naveen Jindal
Rs 120 crore
A sitting Member of Parliament and chairman of Jindal Power & Steel, Jindal has gifted $23 million. He has championed women’s rights, environment conservation, health and education. Named a UT Dallas Distinguished Alumnus last year, he recently presented the university its single-largest alumni gift ever, part of a $30-million donation made along with fellow alumni Charles and Nancy Davidson.