India Story On Investment Is Just Starting Out: FM 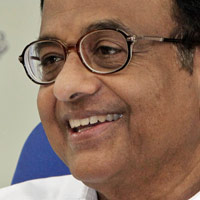 Addressing the First Business Session of ADB Annual Meeting here, he said many projects are plagued by "last mile" bottlenecks in fuel supply, environment clearance, forest clearance, and land acquisition and a Cabinet Committee on Investment (CCI) has been set up to fast track the projects.

"We have permitted FDI in areas such as multi-brand retail, power exchanges, aviation and broadcasting," he said, adding "As I am fond of saying, India's story on investment is just starting out".

The CCI has cleared several mega major projects, including those in the oil and natural gas sectors, which were stuck due to various regulatory clearances.

Following liberalisation of the FDI policy in the aviation sector, Malaysian budget carrier AirAsia has joined hands with Tata Sons and Telestra Tradeplace to launch an airline in India.

Chidambaram, who is also chairman of the ADB Board of Governors, said the government is determined to accelerate the pace of inclusive growth, while maintaining macroeconomic stability.

"We are committed to fiscal consolidation. It will reverse the slippages that took place as a result of the stimulus packages (given in aftermath of global slowdown)," he said.

The Finance Minister said the fiscal deficit as a proportion of GDP would be brought down to 3 per cent by 2016-17.

"This we will achieved by a prudent combination of revenue enhancement as well as expenditure rationalisation," he said, adding India was determined to boost investment both domestic as well as foreign.

Referring to India-ADB engagement, Chidambaram said he was pleased to note that ADB is now embarking on supporting initiatives in skills development.

To take India's engagement with ADB further, Chidambaram invited the Manila headquartered multi-lateral agency to explore how it could deploy its expertise in energy, logistics and skills development around the economic zones being developed by India.

"ADB can not only partner in these efforts but also actively pursue the potential of a corridor linking India, Bangladesh, Myanmar, Asean and Peoples Republic of China," he said.

"In doing so, ADB must build upon its recently approved innovative project - supporting credit enhancement of infrastructure project bonds so as to enable infrastructure developers to tap the vast resources available with insurance firms and pension funds," he said.

The Finance Minister further said India is committed to the goal of regional integration and recognised how least integrated South Asia is in terms of this metric. "...we welcome ADB's intensive engagement in promotion of regional cooperation by bringing together participating countries under South Asia Subregional Economic

Cooperation (SASEC)...,' he said, adding, ADB should ensure that the funds for the regional projects are given to the participating countries as an additionality, over and above the country support programme.