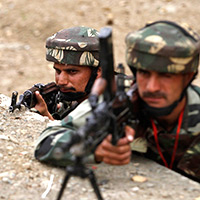 08 November, 2014
Print this article Font size -16+
India should allow more foreign direct investment in defence production in order to speed up deliveries of hardware it badly needs for training and military operations, a senior air force officer said on 6 November' 2013.
The world's biggest arms importer wants to reduce dependence on overseas suppliers and develop the domestic defence industry, but state-run manufacturers' track record is patchy and the government wants private Indian firms to have a greater say.
But some air force officials also want to attract more foreign companies, and believe that a 26 percent cap on foreign direct investment (FDI) in defence production is putting potential partners off.
"Now we have allowed 26 percent FDI in the defence sector. I do not think it is attractive for foreign industry," the Times Now TV channel quoted Indian Air Force's director general for flight safety, Air Marshal P.P. Reddy, as saying.
"Why do we restrict FDI? We need to ponder over it."
In July, India said a cabinet panel would consider proposals for foreign investment in defence above 26 percent, but only if it involved state-of-the-art technology.
India wants to upgrade an outdated weapons systems to keep up with neighbours China and Pakistan in a Rs 6,23,400 Crores modernisation drive, but some of its biggest projects have been dogged by delays often blamed on corruption and bureaucracy.
A Rs 75,270 Crores deal to buy 126 Rafale fighter jets from France's Dassault Aviation has been held up by differences over the role of a local manufacturer, state-run Hindustan Aeronautics Ltd (HAL).
HAL, India's main aeronautics supplier, has been developing a light combat aircraft since the early 1980s with little success.
And almost a decade after the maiden flight of its first prototype, the same company is struggling with its Intermediate Jet Trainer (IJT) project, according to local media.
"Yes, there have been delays. IJT is delayed," Reddy said. "We desperately need these airplanes. The programme is delayed and therefore it is going to put the Air Force in a fine bind as to how we will continue our training."