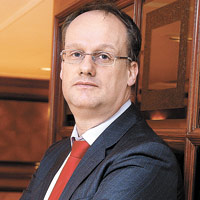 08 November, 2014
Print this article Font size -16+
Herald Van Der Linde, MD and deputy research head at HSBC, was in Mumbai for an investor meet. BW’s Shailesh Menon caught up with him

Everyone’s hoping equities will be the best asset class this year. What is your view?
Equities are cheap around the globe — particularly in Asia. That sets the stage for their performance in 2013. Growth is coming back across the region. It will be a good year for emerging market equities.
Where does India stand in relation to other markets?
In terms of year-to-date returns, India is in the middle of the pack. So, we may see some consolidation over the next month or so. We are bullish on India over a longer time frame. But, for the moment, we are taking a neutral stand. We are looking to make select investments in pharmaceuticals and telecom.
What are your major concerns with regard to Indian equities?
I am a bit worried about the political situation in India. I feel the government may slow down the reforms process as the country is heading towards parliamentary elections next year. The twin deficits and their impact on the currency is another disturbing factor. I am slightly worried about the fact that India while has opened up markets for FDI, not many entities have evinced
any interest.
Corporate earnings of Indian companies have been in line with market expectations over the past few quarters. When will the rating upgrades begin?
We don’t see it happening yet. Across the region, earnings are slightly higher than what they were two or three months ago. At the moment, earnings are not being upgraded in any of these regions. However, there are a couple of reasons to believe that analysts will start upgrades later this year. Economies are recovering; cost-containment of companies has been good. I expect earning upgrades to commence after the second quarter of 2013.
Some analysts believe that foreign portfolio investors may redeem their India allocations to invest in relatively cheaper Chinese equities. What’s your view?
No, we do not expect any sell-off from Indian markets at this point in time. We are only saying that additional allocation by foreign funds will move to cheaper markets like China, Indonesia
and Korea.
With new frontier markets gaining popularity, has Brics lost its old charm?
The question is: was there really any Brics? What do Russia, Brazil, China and India have in common apart from similar income levels? It was a just a very nice moniker to sell investors a portion of emerging markets.