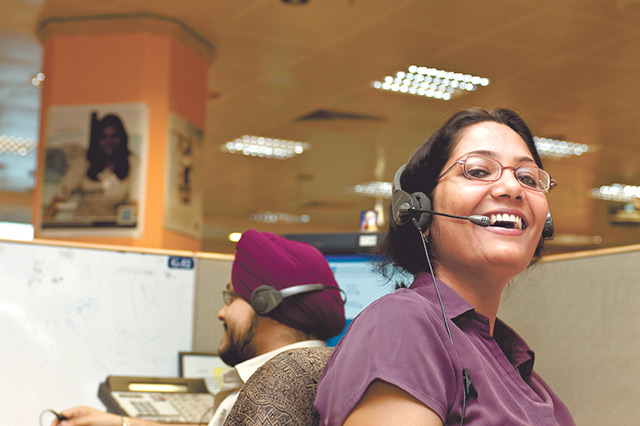 10 March, 2015
Print this article Font size -16+
A latest survey by Accenture shows that more than 7 in 10 respondents (71 per cent) believe the number of women chief technology officers will grow by 2030. And, more than half of respondents (52 per cent) say that their companies are preparing more women for senior management this year than they did last year. Coming to India, ninety per cent of the respondents from India say they expect more women to hold CTO positions by 2030. Also, more women than men in India asked for a promotion, versus last year, when men made this request much more often. More and more women in India are planning to become independent and start their own business (38 per cent  of the total people surveyed). This was also much higher than the women surveyed in other countries.

Accenture conducted its global research survey, “#ListenLearnLead” as part of its 2015 International Women’s Day activities. The survey examines how working men and women view work, the  workplace and opportunities to advance.

The Key India findings were


Listening is becoming more difficult in the digital workplace

·         All employees surveyed think they are good listeners, yet 66 percent of them admit to multitasking more than half of their workday

·         While most believe multitasking helps them accomplish more at work, nearly 80 percent of the respondents say the constant distractions also diminish their ability to do their best

·         While many survey respondents see technology as a benefit for leaders, enabling them to communicate with their teams quickly and easily, three fourth of women respondents from India view technology as “overextending” leaders by making them too accessible

Companies are preparing more women for senior management roles; more women CTOs are expected in the next 15 years

·         90 percent of the respondents from India (Men: 88%; Women: 92%) believe their company training programs have helped them get promoted or expand their roles, while 85 percent of them (Men: 80%; Women: 90%) believe that on-the-job training is more important than formal training and education

New research from Accenture reports that while nearly all (96 per cent) global professionals consider themselves to be good listeners, the vast majority (98 per cent) spend part of their workday multitasking. In fact, almost two-thirds (64 per cent) say that listening has become significantly more difficult in today’s digital workplace.

While 66 per cent of respondents agree that multitasking enables them to accomplish more at work, more than a third (36 per cent) say the many distractions prevent them from doing their best, resulting in a loss of focus, lower-quality work and diminished team relationships. When asked what interrupts their workday the most, respondents cited telephone calls and unscheduled meetings/visitors more than twice as often as they cited instant messaging and texting (79 per cent and 72 per cent, respectively, versus 30 per cent and 28 per cent, respectively).

The research, #ListenLearnLead, which surveyed 3,600 professionals from 30 countries, found that eight in 10 (80 per cent) respondents say they multitask on conference calls with work emails, instant messaging, personal emails, social media and reading news and entertainment (cited by 66 per cent, 35 per cent, 34 per cent, 22 per cent and 21 per cent, respectively). Those who listen actively on calls typically either need something from the call or are required to lead, participate in or follow up on the discussion.

“Digital is changing everything, and new technologies will continue to present challenges and opportunities,” said Adrian Lajtha, Accenture’s chief leadership officer. “As employees become increasingly hyper-connected, leading organisations will seize the opportunity to optimise the use of technology in the workplace, tapping its potential for employee engagement, collaboration and innovation.”

Leading In A Connected World
The research also found that the majority of respondents (58 percent) believe technology  enables leaders to communicate with their teams easily and quickly, and almost half cite  additional benefits, such as flexibility for teams to work anywhere/anytime (47 percent) and increased accessibility (46 percent).

Accessibility, however, is seen as both a help and a hindrance to effective leadership. More than six in 10 women (62 percent) and more than five in 10 men (54 percent) view technology as “overextending” leaders by making them too accessible. All respondents agree that among the top challenges facing leaders today are information overload (55 percent) and rapidly evolving technology (52 percent).

“Whether you are in charge of a meeting, an employee group, a volunteer event or a major project or account, there is always an opportunity to lead,” said Nellie Borrero, managing director, Global Inclusion & Diversity at Accenture. “Our nearly 200 International Women’s Day events around the world will focus on recognizing, capturing and creating opportunities to listen, learn and lead. This year, our new virtual environment – an online, digital and interactive site
will feature live Accenture events, on-demand replays, a networking center, resource room and an expo hall. We invite women around the world to join us.”