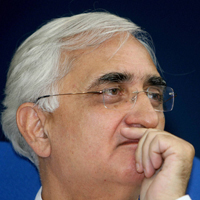 08 November, 2014
Print this article Font size -16+
India with its robust legal structure, banking system and skilled manpower is the new economic icon of emerging powers and is sure to be on track again for 7 per cent growth, Indian External Affairs Minister Salman Khurshid said on Sunday (10 March).

Our development model has managed to deliver long term economic pay offs at much lower levels of investment," Khurshid said. He said that although India too slowed down like other emerging economies in the global downturn but fundamentals of Indian economy remain strong.

"We were aiming at 9 per cent, we had reached 8 per cent GDP growth. Then began the slip, we came to 7 then 6 then 5.8 per cent. But as our Finance Minister and Prime Minster have said, with confidence based on the work that has been done, that over the next two years we will inch back to 7 per cent," he said at a function organised by Aspen Institute India in New Delhi.

People think of us as an alternative or competition to China, but our PM has said clearly that the world is large enough for both of us to be able to operate successfully, both in terms of politics and economics, Khurshid said. Commenting on the economic path taken by India, he said that India has faced the richest range of challenges.

"We have faced richest range of challenges and despite all that we are steering a clear path of growth and that is something China doesn't have. We have got to take our decisions in our public space. Chinese can take their decision in board-rooms," he said.

"We are trying much harder and we are working in much more difficult situations. We wish them well in their system and we hope that we will succeed in our system," he said.