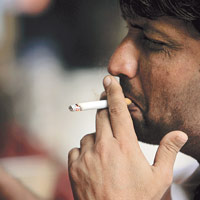 08 November, 2014
Print this article Font size -16+
The economic costs attributable to tobacco use from all diseases in India could be approximately $ 22.4 billion (Rs 1, 04,500 crore) a year, estimates the Public Health Foundation of India (PHFI).

A PHFI report on the “economic burden of tobacco related diseases in India” released here by Union Health Minister Dr Harsh Vardhan om Thursday (29 May) states that the substantial part of it can be attributed to the productive loss of Rs 73,000 crore due to premature mortality. While the direct cost of tobacco attributable diseases amounted to Rs 16,800 crore, indirect morbidity cost was estimated at Rs 14,700 crore.

The report estimated the direct and indirect costs from all diseases caused due to tobacco use and four specific diseases namely respiratory diseases, tuberculosis, cardiovascular diseases and cancers in 13 states that account for 86 per cent of the country’s population.

Cardiovascular diseases shared the highest burden (Rs 3,600 crores) of direct medical and indirect morbidity costs on account of tobacco use, followed by respiratory diseases (Rs 2,800 crores), tuberculosis (Rs 2300 crores) and cancers (Rs 1,400 crores). Among the states which were part of the study Uttar Pradesh shared the highest (28 per cent) of the estimated health cost burden followed by West Bengal (13 per cent) and Andhra Pradesh (12 per cent).

The report has recommended a comprehensive tobacco control policy and a tobacco taxation policy. According to the study, the total economic cost due to tobacco related diseases was 12 per cent higher than the combined state and central government expenditure on health (in 2011-12 as the study was for the year 2011). The total central excise revenue from all tobacco products combined in the same year amounted to only 17 percent of the estimated economic costs of tobacco, the study said.

“A tax increase that raises prices of tobacco products by 10 per cent is estimated to reduce tobacco consumption by 4 per cent to 5 per cent. Essentially, as tax goes up, death and disease goes down. Raising taxes on tobacco is a win-win situation. It is good for people’s health and good for the economy”, Dr Nata Menabde, WHO representative to India, states.

In addition to an increase in tax and enhancing public awareness, the report called for prohibition of sale and manufacture of all forms of smokeless and chewable tobacco products.
Tags assigned to this article:
more 4 who tobacco harsh vardhan phfi nata menabde