India Likely To Announce FDI In E-commerce Next Month 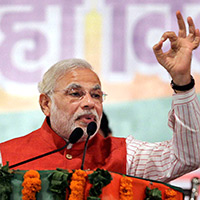 08 November, 2014
Print this article Font size -16+
Prime Minister Narendra Modi's government could allow foreign direct investment in India's e-commerce sector as early as next month, paving the way for global online retailers such as Amazon to expand their business, four people with knowledge of the matter told Reuters.

The decision, which is likely to be announced in the budget, is one of the first tangible signs of economic reform by the business-friendly government of Prime Minister Narendra Modi, who was sworn in 10 days ago and could boost competition in one of the world's biggest, and most price-sensitive, retail markets.

As for whether the government is likely to circumvent political opposition to opening up India's $500-billion retail sector to global retail giants such as Wal-Mart Stores Inc, it is still not clear..
A more robust online retail sector will spur manufacturing and help an economic revival, said the people, who are privy to discussions within the new government. An announcement is expected in next month's budget.

According to the Internet Mobile Association Of India (IAMAI), only 25 million of over 231 million Internet users in India transacted online (as of December 2013), taking the Indian e-Commerce market to Rs 62,697 crore.

Allowing FDI in inventory-based e-commerce firms will help grow Internet usage in the country and provide players access to funds for investing in technology and back-end operations, IAMAI said.

It had been reported earlier in May that the commerce and industry ministry had been ready with proposals to allow foreign direct investment in railways and e-commerce but were waiting for the the new government on the level of FDI to be allowed.

The new Prime Minister is also expected to make the BJP government's stand clear on FDI in multi-brand retail, which the party has repeatedly opposed.

India currently bans global online retailers from selling goods directly to customers but allows them to own 100 per cent of a marketplace business, where third-party suppliers can use their platform. Both Amazon and eBay use such a platform to operate in the country.

When asked about the decision, a spokesman for India's commerce and industry ministry declined to comment.

Global online retailers like Amazon and eBay are currently banned from selling products they have sourced themselves, and must rely on third-party suppliers. Their platforms, which they own fully, are marketplaces for these outside suppliers.

The government is likely to end this ban, paving the way for global retailers to bring their formidable supply chain, and cheaper goods, into India, potentially boosting consumption and benefiting small manufacturers and traders.

These politically influential small-scale traders have traditionally opposed any foreign direct investment into retail, fearing they would be eclipsed by larger global rivals.

Modi's Bharatiya Janata Party (BJP) also opposes such investments, but the people said the government supports the online retail expansion as global e-commerce firms would still have to rely on small traders to generate business.

Regulatory uncertainty under the previous government had prevented foreign supermarket chains from setting up shop in the country. So far, only Britain's Tesco PLC has announced an investment. In its election manifesto, the ruling BJP vowed to ban foreign supermarkets.