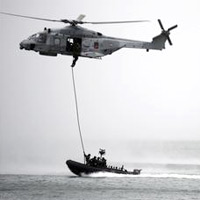 08 November, 2014
Print this article Font size -16+
Cracking the whip, the Indian government on Friday, 15 February, 2013 initiated action to scrap the VVIP chopper deal from Italian firm AgustaWestland in the wake of allegations that kickbacks to the tune of Rs 362 crore were paid to bag it.
The Defence Ministry issued a show cause notice to AgustaWestland, asking it to explain within seven days the bribery allegations, ministry spokesman Sitanshu Kar said.
The notice asked the company why the Rs 3,600 crore deal of 2010 should not be scrapped.
"The Defence Ministry issued a formal show cause notice to AgustaWestland seeking cancellation of the contract and taking other actions as per terms of the contract," the spokesman said.
The notice comes a day after the ministry warned of legal action, including invoking integrity pact which provides for cancellation of the contract if bribes are paid and recovery of the money already paid.
With the VVIP choppers deal facing charges of kickbacks, government on Thursday, 14 February, 2013, had formally asked Italian firm Finmeccanica to state whether any money was illegally paid to any Indian entity or individual amidst its warning of legal action including blacklisting of the firm.

The Ministry of Defence, which is under attack on the issue, came out with a fact-sheet detailing the sequence of the Rs 3,600-crore deal for 12 helicopters clinched in 2010 by a Finmeccanica subsidiary AgustaWestland.
India has already received three of the 12 helicopters and paid upto 30 per cent of the amount.
Chopper Scam: Govt Asks Italian Co For Details
AgustaWestland Kept Rs 217 Cr For Bribe'
After the arrest of Finmeccanica CEO Giuseppe Orsi in Milan on Tuesday in connection with the bribery charges, India had put on hold the receipt of the remaining helicopters as well as rest of the payment.
Former Air Chief S P Tyagi has been accused of being a beneficiary of alleged kickbacks said to have been received by his three cousins but he has denied any wrongdoing.
Former IAF Chief Tyagi Refutes Bribe Allegation
The government on 14 February, 2013, formally asked Finmeccanica, the parent company of AgustaWestland, to state whether any money was illegally paid to any Indian entity or individual "which would be violative of the Integrity Pact or any other terms and conditions of the contract".
It noted that the contract with AgustaWestland carried an integrity pact that bars paying of bribes or involvement of middlemen, the Ministry warned of "strict action including cancellation of contract, recovery of payment, blacklisting and penal action can be taken against the vendors."
India's reputation as a corrupt country has not been helped by this latest case. Defending Finmeccanica SpA's jailed ex-chief executive officer Giuseppe Orsi, Italy's three-time former Prime Minister Silvio Berlusconi had recently said said bribes are a necessary part of doing business globally.

Probes Are Economic Suicide: Berlusconi
"Bribes are a phenomenon that exists and it's useless to deny the existence of these necessary situations," Berlusconi said in a televised interview.

"These are not crimes. We're talking about paying a commission to someone in that country. Why, because those are the rules in that country," the former premier was quoted as saying by Bloomberg.

"Everyone knows that as well as the tenders, agreements between governments are also involved," Berlusconi said. He added: "The fact that there is the risk of magistrates intervening I consider to be economic suicide".
Contract Had Provisions Against Bribery
The ministry said the contract signed with AgustaWestland includes "specific contractual provisions against bribery and the use of undue influence. Article 22 of the contract deals with penalty for use of undue influence. This clause entitles the Buyer to cancel the contract with the Seller and recover from him the amount of any loss arising from such cancellation."
"Article 23 of the contract entitles the Buyer to consider cancellation of the contract without any entitlement or compensation to the Seller who shall be liable to refund all payments made by the Buyer in terms of the contract along with interest," it said.
The Ministry said any breach of the provisions of the Integrity Pact entitles the Buyer to take actions against the Seller which includes forfeiture of the earnest money, performance bond, cancellation of the contract without giving any compensation, to recover all the sums already paid with interest, to cancel any other contracts.
It also says debars the bidder from entering into any bid from the Government for a minimum period of five years which may be extended.
(Agencies)
Tags assigned to this article:
economy business politics news 4 aviation helicopters ministry of defence defence ministry finmeccanica agustawestland