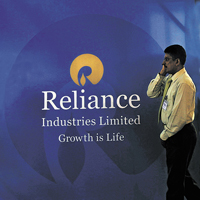 A panel of Indian officials, including those from the upstream regulator, have declared three gas discoveries in Reliance Industries KG D6 block as commercial, subject to certain conditions, an oil ministry official told reporters.

India's oil ministry had asked Reliance and partner BP to share all records and accounts for the D6 block operated by them, off India's east coast, with the federal auditor, or risk deadlock on development crucial to step falling gas output.